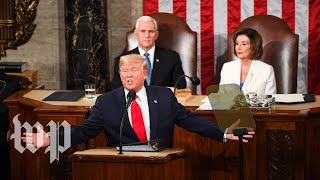 Last night's extravaganza referred to annually as the "State of the Union" address delivered by the US president was after reading the highlights-lowlights?-no I couldn't bear watching and listening in real time having previously watched the dissembler in chief's response to the Iranian retaliatory strike in Iraq the previous night that was Iran's response to Trump's ordering the assassination of Iranian General Qassam Suleimani -should be appropriately described as the presidential theater of the absurd.

The Trumpian farce continued with el presidente giving a Presidential Medal of Freedom to ultra-conservative blowhard talk show host Rush Limbaugh-which if the medal wasn't tarnished already particularly with the likes of George Tenet in 2004-the notorious head of the CIA who acquiesced over "Dubya" Bush's invasion of Iraq a year earlier when he and the CIA knew there was no legal justification for invading Iraq, to Paul Bremer the viceroy "Dubya" appointed to oversee Iraq after the March 2003 invasion whose first move was to disband the 400,000 Iraqi army instantly creating the insurgency against the US occupation that eventually killed more than 5,000 US military personnel in the country as well as hundreds of thousands innocent Iraqi citizens, to Tony Blair, the former PM of Great Britain who went along with "Dubya" in his illegal invasion of Iraq knowing it was contrived as evidenced by the secret British "Downing Street Memo" that later came to light which indicated "the intelligence and facts were being fixed around policy" by the Bush administration prior to its invasion.

How's that for a rogue's gallery of infamous, despicable, deplorable characters who received the "Presidential Medal" of Freedom". So adding Limbaugh to this cast of characters "fits" nicely to the medals already tarnished, diminished capacity to recognize someone performing a distinguished service to the country.

Of course the "theatrics" droned on with Trump talking up "tax reform, deregulation, the border wall and support for police and immigration enforcement" all mixed in citing different individuals. One in particular a two year old who was born prematurely at barely 22 weeks old apparently depicted as the living monument for Trump's efforts to outlaw late term abortions.

Then there was the absurdity of linking a soldier killed in Iraq by a roadside bomb in 2008 to justify Trump's drone assassination of Suleimani a month ago outside Baghdad's international airport.

A truer depiction, a more accurate account of reality in America was written a day earlier by Chris Hedges titled, "America: Land of Make-Believe". [1]

"The rhetoric we use to describe ourselves is so disconnected from reality that it has induced collective schizophrenia. America, as it is discussed in public forums by politicians, academics and the media is a fantasy, a Disneyfied world of make believe. The worse it gets, the more we retreat into illusions. The longer we fail to name and confront our physical and moral decay, the more demagogues who peddle illusions and fantasies become empowered"-know of someone that neatly fits that description?

Further Hedges wrote, "Those who acknowledge the truth-beginning with the stark fact that we are no longer a democracy-wander like ghosts around the edges of society, reviled as enemies of hope". Hedges latest is must read even more so considering the outlandish State of the Union performance Trump gave last night.

Considering that performance and believe in the America he concocted is to embrace the fantasy of America Hedges so presciently described in his essay.

To that I repeat a quote penned by Terrance McKenna, "The cost of sanity in this society is a certain level of alienation". I keep it handy re-reading it as necessary.

Retired. The author of "DECEIT AND EXCESS IN AMERICA, HOW THE MONEYED INTERESTS HAVE STOLEN AMERICA AND HOW WE CAN GET IT BACK", Authorhouse, 2009
Related Topic(s): America; Fantasy; Reality; State Of The Union Speech; Trump, Add Tags
Add to My Group(s)
Go To Commenting
The views expressed herein are the sole responsibility of the author and do not necessarily reflect those of this website or its editors.