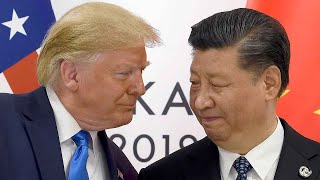 In announcing that the U.S. and China are resuming trade talks, President Trump demonstrated the socialist mindset that afflicts him and his fellow Republicans and, for that matter, the Democrats as well. Trump said that during the negotiations, the United States would keep a 25 percent duty on $250 billion of Chinese goods and that he would give China a list of U.S. products to buy.

A list of U.S. products to buy? How in the world does Trump come up with such a list? How does he know what China wants? What if China isn't interested in buying those particular things? It doesn't matter, at least not to Trump. What matters to him is that he knows which particular U.S. products he wants sold and is forcing China to buy them as part of the agreement to return to the negotiating table.

It would be difficult to find a better example of the mindset of a central planner than that. Under a free-market system, people are free to buy whatever they want to buy. They make the choice, not the government.

Now, we all know that China is not a genuine free-market system. While the Chinese regime has tremendously reduced government control over economic activity, there is still a considerable amount of government enterprise, not to mention the fact that the government retains overall control over economic activity. Like here in the United States, there is still a large amount of central planning, government management of the economy, subsidies, and other socialist and interventionist policies. Thus, the decisions to purchase things are made by both the Chinese government and the Chinese private sector.

Regardless, whether it's either the Chinese government or a Chinese business that is doing the buying, the principle is the same: they are going to buy what they want to buy. Why should they be compelled to buy what they don't want to buy as a condition for negotiations that might lead to Trump ending his trade war?

Like Chinese President Xi Jinping, Trump has convinced himself that the role of a president of a country is to manage and control trade and economic activity. That's why he is providing the Chinese with a list of what they must buy from American sellers, whether they want to buy such things or not.

How does Trump decide which American products and sellers make his favorites list? Politics, of course. We have a presidential election coming up. Trump is no dummy. Like his Democratic opponents, he has to start passing out the political candy in order to get votes. Therefore, the people who are going to make the list are those who stand a good chance at helping him get elected. Among the privileged will almost certainly be those American farmers who Trump has bankrupted or severely damaged economically with his trade war. To ease the economic destruction that he has wrought on them, Trump ended up putting them on welfare. Undoubtedly he will put them on his favorites list so that he can proclaim, "Look what I have done for you. I bankrupted you but I put you on welfare and also on my favorites list that forced the Chinese to buy your products. We are winning my trade war and we are making America great again!"

What people want to buy never enters the mind of the central planner. All that matters is what Trump wants, and right now he wants accolades and votes. In fact, Trump's entire trade war goes to show the mindset of the central planner, one characterized by what Friedrich Hayek called a "fatal conceit" a conceit by which the planner professes to know what people want better than they do. Convinced that American businessmen could not handle China's unfair trade practices, Trump designated himself as the official agent for American business and industry. By raising taxes on the American people (that's what tariffs are), Trump was going to show the Chinese how "tough" he could be in trade negotiations as agent for American business and industry. Predictably, China retaliated by increasing tariffs on American goods.

The losers in all this trade mayhem? Both the American people and the Chinese people. Among American losers are the businesses that have been bankrupted or severely damaged by Trump's trade antics. Also losing are American consumers, who Trump has forced to pay higher prices for items they wish to purchase.

Most important, Trump's antics have served to further destroy the economic liberty of the American people. People have the fundamental, natural, God-given right to trade with whomever they want. That's what freedom, at a minimum, necessarily entails the right to use your money the way you want. As the Declaration of Independence, which we celebrate this week, points out, no government, not even the U.S. government, wields the legitimate authority to destroy the liberty of its own citizens. Yet, that is precisely what Trump has done with his trade war.

The Democrats? They too believe that it's the role of a president to manage trade and to negotiate trade deals with foreign nations. They too have the socialist mindset of the central planner. Their only difference with Trump is that they feel that they can be better central planners than Trump and his Republican cohorts.

The libertarian position? Reject socialism and central planning entirely. Ditch trade negotiations and trade agreements. Unilaterally lift all U.S. trade restrictions and tariffs on the American people. Free the American people to trade freely with whomever they want anywhere in the world, including Cubans, Iranians, North Koreans, Chinese, Venezuelans, and everyone else in the world.

If foreign regimes engage in unfair trade practices, which is a virtual certainty, so be it. Leave that to American businessmen and American consumers. What foreign regimes do to their citizenry is no business of a U.S. president or the U.S. government.

Related Topic(s): China; Products; Tariffs; Trade; Trump Is A Thug, Add Tags
Add to My Group(s)
Go To Commenting
The views expressed herein are the sole responsibility of the author and do not necessarily reflect those of this website or its editors.