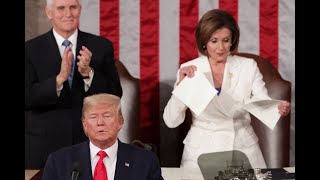 The ghost of Orwell has never been far from Trump's misleading rhetoric, outright lies, dehumanizing invective and punitive policies. All of the latter were on full display in Trump's 2020 State of the Union address. Trump's speech moved between the kind of absolutes one expects from demagogues, including comments that ranged from how great America is (overlooking how millions live in poverty and millions have lost health care under Trump) and how the U.S. economy is in an unprecedented boom (when in reality it grew at its slowest pace since 2016). Trump's speech also included outrageously false claims about the president's supposed support for people who have preexisting conditions and protection of Medicare, Social Security and Medicaid, when in reality he has taken steps to weaken or eliminate protections for patients with preexisting conditions, and he has proposed cutting funding for all three social programs.

Authoritarian societies protect the powerful not the poor or vulnerable and Trump made that clear in boasting about tax policies that largely benefit the ultra-rich and major corporations. He lied about supporting workers' rights and "restoring manufacturing rights" even as he continues to implement regulatory roll-backs that endanger both the environment and the health of workers and many other people in the U.S. His claim that he has launched the great American comeback is laced with death-dealing policies that range from criminalizing social problems, demonizing and punishing undocumented immigrants and their children, and laying claim to ultra-nationalist and white supremacist rhetoric that echoes the social and racial cleansing policies of earlier fascist societies. When Trump says in his speech "our families are flourishing," he leaves out the misery and suffering he has inflicted on the many people who don't fit into his white Christian notion of the public sphere, as well as on the immigrants and other people of color whom he has deemed disposable.

His claim to be building the world's most prosperous and inclusive society reeks with bad faith given not only Trump's overt racism, but also his use of white nationalist Stephen Miller as his trusted adviser and major speech writer, and his awarding of the Presidential Medal of Freedom to Rush Limbaugh, a conservative radio host whose unchecked racism, misogyny and sexism is his calling card. Like most right-wing demagogues, Trump refers to national health care, which most advanced countries have, as "socialist" and absurdly seeks to portray such health programs as designed by Democrats largely to benefit undocumented immigrants.

Trump's ignorance, which is far from innocent, was on display when he stated that his administration is working to protect the environment by planting new trees. At the same time, he has rolled back numerous environmental standards designed to protect the environment, pulled the U.S. out of the Paris climate agreement, loosened regulations on toxic air pollution, opened public lands for business, and gutted the power of the Environmental Protection Agency, among other policies.

In his State of the Union speech, Trump unapologetically aligned himself with the war-mongering militaristic policies that one expects in fascist societies. His most fascistic statements centered around celebrating Immigration and Customs Enforcement officers, conflating undocumented immigrants with "criminals," and describing sanctuary cities as a threat to American security and safety. Meanwhile he bragged about stacking the federal courts with right-wing judges and expressed admiration for the two right-wing Supreme Court justices he has appointed, Neil Gorsuch and Brett Kavanaugh.

Trump's State of the Union reeked with the mobilizing passions of fascism, including invocations of extreme nationalism and calls for the expansion of military power, as well as outright racism, lawlessness, contempt for dissent and anti-immigrant bigotry.

Amid all this, the Republican-controlled Senate was willing to overlook Trump's authoritarianism, disdain for democracy and ruthless grab for power and acquit him of the impeachment charges, all the while making it clear that matters of evidence, facts, truth and justice were irrelevant to the Republican senators' decision. Trump's State of the Union was more than a highly charged campaign speech it was also indicative of the state of decline and crisis the United States is experiencing under the grim shadow of authoritarianism.

In the current moment, with a possible war with Iran still in the making, the ongoing anti-democratic actions of a deeply authoritarian Trump government, and the refusal of both political parties and the corporate press to address the deeper economic and political crisis facing the United States, it is crucial to analyze the current crisis of governance in a broader context that analyzes fascism as a possible wave of the future. The contemporary elements of tyranny at work in the United States point not only to a crisis of leadership and the rise of demagogues such as Trump on domestic and global stages, but also to the conditions and crisis that produce the discontent of millions of people who are embracing a politics of fear in the face of economic instability and climate insecurity.

We live in an age of relentless crisis, an age marked by the collapse of civic culture, ethical values and democratic institutions that serve the public good. Language now operates in the service of violence, and ignorance has become a national ideal. Religious fundamentalism, white supremacy and economic tyranny now inform each other, giving rise to an updated recurrence of fascist politics. This is an age in which apocalyptic prophecies replace thoughtfulness and sustained acts of social responsibility. In this age of crisis, right-wing populist regimes fuel conspiracy theories, normalize lying as a way to degrade public discourse and elevate emotion over reason as a way to legitimate a culture of cruelty. As a result, more and more people feel the need for vengeance and the imposition of brutality and injury upon those portrayed as disposable.

The impeachment process speaks not only to Trump's ongoing criminal behavior and pernicious policies, but also to a mass crisis of civic literacy and the inability of the public to understand how society has broken apart, become crueler, and receded from the language of critique, hope and the social imagination. A culture of withdrawal, privatization and immediacy reinforces an indifference to public life, the suffering of others, and what Hannah Arendt once called "the ruin of our categories of thought and standards of judgment." The space of traditional politics and a media-driven culture no longer provide the language for understanding the totality of the crisis that has produced both Trump and the impeachment process. In the absence of a comprehensive politics capable of defining the related parts and threads that point to a society in crisis, violence especially as related to the joining of a predatory neoliberalism and a fascist politics of white supremacy becomes the regulative principle of everyday life.

Evidence of the distinctive nature of today's crisis on both a national and global level can be glimpsed in the political and cultural forces that shaped President Trump's impeachment, the Brexit fiasco, and the rise of authoritarian demagogues in Brazil, Turkey and Hungary, among other countries. This is a general crisis whose roots lie in the rise of global neoliberalism with its embrace of finance capital, massive inequities in wealth and power, the rise of the racial punishing state, systemic state violence, and the creation of an age of precarity and uncertainty. This is a crisis produced, in part, through a full-scale attack on the welfare state, labor and public goods. Under such circumstances, democracy has become thinner, and the social sphere and social contract no longer occupy an important place in Trump's America.

As Nancy Fraser points out, "these forces have been grinding away at our social order for quite some time" and constitute not only a crisis of politics and economics, which is highly visible, but also a crisis of ideas, which is not so visible. As the global economy has unraveled, the backlash against the so-called political elites and established forms of liberal governance has often produced movements for popular sovereignty that lack the crucial call for equal rights and social justice. The current historical crisis not only re-figures the social sphere as a site of commercialism and infantilism, but also redefines matters of individual and social agency through the mediation of images in which self-alienation is reinforced within a culture of immediacy, disappearance and a flight from any sense of social responsibility.

The crisis of politics is now matched by a mainstream and corporate-controlled digital media and screen culture that heightens ignorance and produces political theater and fractured narratives. At the same time, it authorizes and produces a culture of sensationalism designed to increase ratings and profit at the expense of truth. This culture undermines a complex rendering of the related nature of social problems and suppresses a culture of dissent and informed judgments.

Related Topic(s): Demonization; Fascism; Racism; Sotu; Trump Against Democracy; Trump Apologists; Trump Bigotry; Trump Fake News; Trump Liar; Trump Tyrant; (more...) Trumpism, Add Tags  (less...)
Add to My Group(s)
Go To Commenting
The views expressed herein are the sole responsibility of the author and do not necessarily reflect those of this website or its editors.