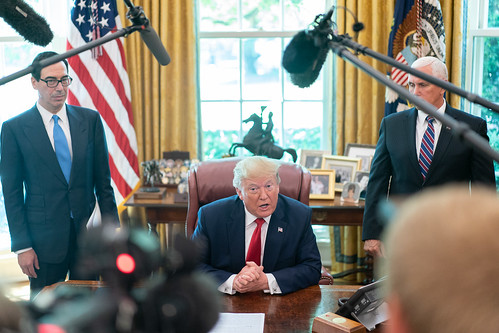 In 2011, Donald Trump tweeted the following:

In order to get elected, @BarackObama will start a war with Iran.

Nearly a year later, he followed with:

Now that Obama's poll numbers are in tailspin watch for him to launch a strike in Libya or Iran. He is desperate.

Don't let Obama play the Iran card in order to start a war in order to get electedbe careful Republicans!

This indicates a lot about how Donald Trump thinks the way presidents win re-election.

Although Trump's prognostication about Barack Obama starting a war with Iran was incorrect, Trump is planning on doing what he accused Obama of intending now that he is the first impeached president to run for re-election and the tide of public opinion is turning against him.

Trump has been provoking Iran since he first stepped foot in the Oval Office.

But the violence ensuing at the U.S. embassy in Baghdad, Iraq over American airstrikes against Iranian-backed militia Kata'ib Hezbollah (KH), and the Trump administration's reaction to it, could be the match for which Trump has been searching.

In order the understand what is going on here, we must separate it from the predictable "us versus them," "Iran versus the West" perspective.

While the mainstream and right-wing media might be concentrating on protesters who attacked the US embassy, trapping diplomats, chanting "Death to America," the story is far more complicated.

Related Topic(s): Embassy Consulate US; Iran; Iraq; Military; Pentagon; Policy; Provocation; Trump, Add Tags
Add to My Group(s)
Go To Commenting
The views expressed herein are the sole responsibility of the author and do not necessarily reflect those of this website or its editors.