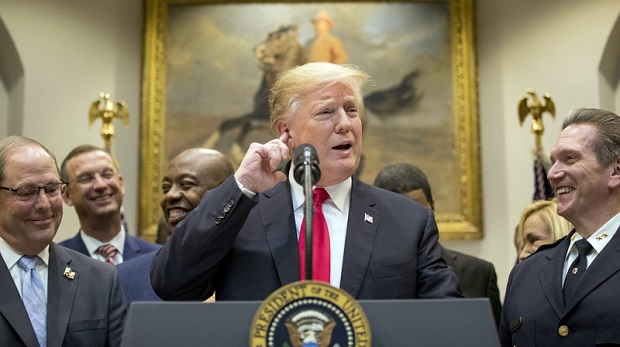 There is a rather vocal sector of the so-called 'progressive left' that has decided it is best to tolerate Donald Trump and his administration's fascist policies
(Image by npr.org)   Details   DMCA

There is a rather vocal sector of the so-called "progressive left" that has decided it is best to tolerate Donald Trump and his administration's fascist policies. This is mainly because Trump has made a few narrowly-focused decisions that the pro-Trump "left" happens to support. The Trump decisions that have enamored the faux left include the much-ballyhooed "withdrawal" of U.S. military forces from Syriaactually, some of those forces remain in-countryas well as trash talking NATO and U.S. bilateral military alliances with South Korea and Japan.

These phony progressives also agree with Trump's kooky contention that it was Ukrainian government and not Russian oligarchical interests that interfered with the 2016 U.S. election. Ignored by the left-wing promoters of Trump is well-documented evidence of social media manipulation, analytical data micro-targeting of voters, and penetration of local and state election systems by an alliance of high-tech firms like Facebook; Twitter; YouTube; Cambridge Analytica; the Internet Research Agency of St. Petersburg, Russia; Concord Management and Consulting LLC, and others.

The so-called progressives stand with jailed WikiLeaks' cause ce'lèbre Julian Assange and a far-out conspiracy theory that the Democratic National Committee; the murdered DNC staffer Seth Rich; the Ukrainian embassy in Washington (which ironically occupies the Marbury House, once owned by William Marbury of the famous 1803 Marbury v. Madison Supreme Court case that established the legality of judicial review of executive and legislative decisions and may ultimately be the basis for Supreme Court review of executive and legislative actions involving Trump's impeachment); the Sunnyvale, California-based cyber-security firm CrowdStrike; intelligence firm Fusion GPS; senior echelons of the FBI and CIA; and God knows who else all conspired to meddle in the 2016 election on behalf of Hillary Clinton and the Democrats. Such a fantastic scenario could not even be conjured up by the most proficient mystery plot writers in Hollywood.

The Trump apologists of the left generally have one thing in common: they despise Hillary Clinton more than Trump. It is very doubtful that had she been elected, Ms. Clinton would have built an East German-type barrier on the southern border; ripped children from their parents and "disappeared" them into a byzantine network of "Christian" foster care, detention centers, and holding facilities; praise white nationalism; interfere with military justice; or demonize the U.S. Foreign Service, Civil Service, the Intelligence Community, the U.S. House of Representatives, the judiciary, and federal law enforcement.

The United States is generally in the same situation that Spain found itself in during the Spanish Civil War. The Spanish fascists, led by General Francisco Franco, besieged the capital city of Madrid in 1936. The Spanish Republican government was led by a Popular Front of Socialists, Communists, Workers General Union, Radical Socialists, Trotskyists, the United Socialist Party of Catalonia, and Catalonian and Galician nationalists. When the tide began to turn against the military forces of the Spanish Republic, the Trotskyist Workers' Party of Marxist Unification (Partido Obrero de Unificación Marxista [POUM]), working alongside Spanish Anarcho-Syndicalists, decided that it was far better to establish a link with the fascist forces of Franco than to cooperate with Stalinist elements of the Popular Front. The perfidy of these Popular Front Trotskyist turncoats, which led to the defeat of the Republic and execution by the fascists of thousands of Popular Front leaders and activists, is still remembered in Spain as the act of an insidious Fifth Column.

Today, the Trotskyists have reappeared in the person of Democratic presidential candidate and former Socialist Workers Party activist Bernie Sanders. Sanders, a relative Johnny-come-lately to the Democratic Party, once adhered to the Trostskyist line. Today, rather than totally reject the hard core pro-Trump bloc that seized control of the Republican Partythe modern-day Franco fascistsSanders and others insist that they can win over die-hard Trumpists to their side. This sort of political expediency was at the heart of the strategy of the Trotskyist Fifth Column in Spain. Trotsky had no problem allying himself and his loyalists with the Nazis and fascists so long as it might have led to the overthrow of Joseph Stalin and the establishment of a new personality cult regime of Trotsky in the Soviet Union. Another faction in the modern-day Fifth Column in the United States is the Green Party of Jill Stein. As is the case with Sanders and Representative Tulsi Gabbard (D-HI), Stein has no problem reaching out to Trump supporters and embracing some of their far-out conspiracy theories in search of a few votes here and there.

The American Fifth Columnists who constantly make excuses for Trump have effectively and completely sold out the Palestinians, whose very territory was recently recognized by Trump as annexed Israeli land. The modern Trotskyists have also sold down the river the Kurds; Native Americans of North, Central, and South America; the families of mass shooting victims in the United States, Canada, and New Zealand and wrongful police shootings of African-Americans across America; and the people of South Korea, Yemen, Lebanon, Puerto Rico, Bolivia, Brazil, Venezuela, the Bahamas, American Samoa, and Hong Kong. In fact, any group standing up to the dictators and tyrants Trump has embraced, has been sold out by the Trump apologists of the left.

George Soria, the Spain correspondent for the French Communist daily, L'Humanite', wrote in 1938 that Trotskyism was "typical of the parasitic growths which attach themselves to all great popular movements." The POUM Trotskyists maintained frequent contact with right-wing White Russians, who, in turn passed POUM intelligence on the Spanish section of the Communist Third International, the Spanish Communist Party, and the Popular Front to Franco, the Nazi government in Berlin, and Benito Mussolini's fascist government in Italy. POUM conspired with spy-diplomats at the Peruvian embassy in Madrid to pass to Franco's forces maps showing the location of anti-aircraft batteries defending Madrid.

Today, we see false progressives appearing on Fox News, Newsmax, and One America News Network to disparage all the Democratic presidential candidates except for Sanders, Gabbard, and the New Age guru and grifter Marianne Williamson [original family name Vishnevetsky].

Provocateurs and fifth columnists will always seek to disrupt. This only becomes a real problem when the people allow them to get away with it.