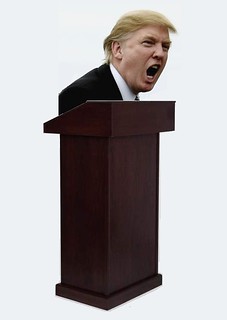 he word "populist" is so overused in American politics. It used to describe a politician who stood with working people or who talked on the stump about inconvenient truths. Now it just means blowhards like Donald Trump, who can't help but humiliate themselves by pandering to the lowest common denominator among American voters. Trump's phony populism is really nothing but racism, classism, and what has become of the conservative movement in this country.

Trump is crushing his Republican opponents in early primary and caucus states like Iowa, New Hampshire, and South Carolina and in nationwide polls. That tells me a lot of Republican primary voters are easily duped at best, and racist idiots at worst.

Trump can't even keep his own positions on the issues straight. The September 5 issue of The Economist notes that Trump has claimed to be "very pro-choice" and "pro-life." On guns, he has claimed to support taking all guns off the streets and to "fully support the Second Amendment." A few years ago he called for a single-payer health system; now he says he opposes Obamacare and will replace it with "something terrific."

Trump told reporters recently that he wants to build a wall along the border with Mexico, force the Mexicans to pay for it, and expel not only the estimated 11 million undocumented workers in the United States, but also their children who were born here and who are, whether Trump likes it or not, American citizens. Trump obviously doesn't know history. This is exactly how other fascist governments have gotten started in the past: Expel the "foreigners" and purify the country.

It is Trump's foreign and military policy ideas (and utter lack of credentials) that frighten me the most.

Last week, the New York Times reported that Trump confused Iran's Revolutionary Guard's Quds Force with Iraq's Kurds. Trump didn't know who heads the Quds Force. Well, he said he did, and then he told the reporter, "Go ahead, give me a little, go ahead, tell me." He finally admitted that he didn't know the players among the world's various terrorist groups, but he said that wasn't important. "You know, I'll tell you honestly, I think by the time we get to office, they'll all be changed. They'll be all gone." We should be so lucky.

Nobody seems to know who, if anybody, is advising Trump on foreign policy. He told NBC's Chuck Todd that his "go-to" person on foreign policy is former Bush-era ambassador to the UN John Bolton. This is the same neo-con John Bolton who claimed in 2002 that Cuba was selling biological weapons to rogue states and that Saddam Hussein had tried to buy yellowcake uranium from Niger, neither of which were true.

Trump's military qualifications are even more frightening. It's not just that he doesn't have any. It's that he pretends he does, and he appears to have convinced himself that he knows what he's talking about. Trump attended a military academy in upstate New York, from which he graduated in 1964. He told a biographer, with whom he later cut all ties, that he "always felt that I was in the military" because of his education at the military school. "I had more training militarily than a lot of the guys that go into the military."

The draft dodger Trump famously criticized Senator John McCain earlier in the campaign, earning the consternation of many mainstream conservatives but no apparent punishment in the polls. "He's not a war hero," Trump said of the decorated war hero who spent more than five years as a prisoner of war in a Vietnamese prison camp. "He's a war hero because he was captured. I like people that weren't captured."

So who is advising Trump on military issues? According to Trump, it's "Jacobs," apparently referring to retired colonel Jack Jacobs. Jacobs, however, said that although he has met Trump, he has never advised him in any way.

My own belief is that Trump is so arrogant, that he believes himself such a genius, that he has no advisors. He doesn't think he needs them. He's just winging it. Do Americans really want a president who describes trade with China as "the greatest theft in the history of the country" and who says that "every single country that does business with us is ripping America off?" Do Americans really want a president who has repeatedly filed for bankruptcy, yet still declares that he's the "greatest businessman in America?" Do we want a president whose knee-jerk reaction to criticism is to launch personal attacks against the person making the criticism, even when he comes off as an unhinged maniac? Apparently some of them do.

MIT economics professor Jonathan Gruber took a lot of heat in 2014 for saying that American voters are essentially stupid. The sad truth is that he's right. At least, the 28 percent of Republicans polled who think Donald Trump ought to be the next president are.

Related Topic(s): Classism; Donald Trump; Hate-Racism-Bigotry; Republican, Add Tags
Add to My Group(s)
Go To Commenting
The views expressed herein are the sole responsibility of the author and do not necessarily reflect those of this website or its editors.