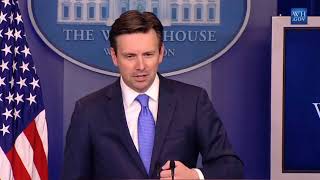 That's why, according to three senior officials on the transition team, the incoming Trump administration is considering evicting the White House press corps from the press room inside the White House and moving them -- and news conferences -- to a conference center or to the Old Executive Office Building.

This may sound like a small logistic matter. It's not. The White House "press room" contains work stations and broadcast booths, and the briefing area for presidential news conferences. Reporters have had work-space at the White House since Teddy Roosevelt was president, in 1901.

But we're in a new era, the reign of King Trump.

Sean Spicer, Trump's press secretary, acknowledges "there has been some discussion about how" to move the press out of the White House. Spicer says it's because the new administration would like a larger room to allow more members of the press to attend press conferences.

Rubbish. It's because a larger room would allow the administration to fill seats with "alt-right" fringe journalists, right-wing social media, Trump supporters and paid staffers. They'd be there to ask the questions Trump wants to answer, and to jeer at reporters who ask critical questions and applaud Trump's answers.

The move would allow Trump to play the crowd.

It wasn't really a press conference at all, and shouldn't have been characterized as one. It was a fake news conference that took place in a large auditorium.

In the audience were paid staffers who jeered and snickered when reporters asked critical questions, and cheered every time Trump delivered one of his campaign zingers. It could easily have been one of his rallies.

In this carnival atmosphere it was easy for Trump to refuse to answer questions from reporters who have run stories he doesn't like, and from news outlets that have criticized him.

He slammed CNN for dispensing "fake news," called Buzzfeed "a pile of garbage," and sarcastically called the BBC "another beauty." The audience loved it.

Just as he did in his rallies, Trump continued calling the press "dishonest" -- part of his ongoing effort to discredit the press and to reduce public confidence in it.

And he repeatedly lied. But the media in attendance weren't allowed to follow up or to question him on his lies.

Related Topic(s): Donald Trump Lies; Press Conference; Press Secretary; Reporters; White House Press, Add Tags
Add to My Group(s)
Go To Commenting
The views expressed herein are the sole responsibility of the author and do not necessarily reflect those of this website or its editors.