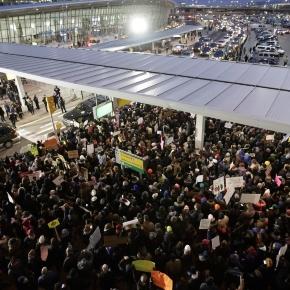 IT IS NOT difficult for any decent human being to immediately apprehend why and how Donald Trump's ban on immigrants from seven Muslim countries is inhumane, bigoted, and shameful. During the campaign, the evil of the policy was recognized even by Mike Pence ("offensive and unconstitutional") and Paul Ryan (violative of America's "fundamental values"), who are far too craven and cowardly to object now.

Trump's own defense secretary, Gen. James Mattis, said when Trump first advocated his Muslim ban back in August that "we have lost faith in reason," adding: "This kind of thing is causing us great damage right now, and it's sending shock waves through this international system."

The sole ostensible rationale for this ban -- it is necessary to keep out Muslim extremists -- collapses upon the most minimal scrutiny. The countries that have produced and supported the greatest number of anti-U.S. terrorists -- Saudi Arabia, Egypt, Qatar, UAE -- are excluded from the ban list because the tyrannical regimes that run those countries are close U.S. allies. Conversely, the countries that are included -- Syria, Iraq, Libya, Somalia, Iran, Sudan, and Yemen -- have produced virtually no such terrorists; as the Cato Institute documented on Friday night: "Foreigners from those seven nations have killed zero Americans in terrorist attacks on U.S. soil between 1975 and the end of 2015." Indeed, as of a 2015 study by the New America research center, deaths caused by terrorism from right-wing nationalists since 9/11 have significantly exceeded those from Muslim extremists.

Trump's pledge last night to a Christian broadcasting network to prioritize Christian refugees over all others is just profane: The very idea of determining who merits refuge on the basis of religious belief is bigotry in its purest sense. Beyond the morality, it is almost also certainly unconstitutional in a country predicated on the "free exercise of religion." In the New York Times this morning, Cato analyst David Bier also convincingly argues that the policy is illegal on statutory grounds as well.

Related Topic(s): Immigrants; Muslim; Trump Foreign Policy, Add Tags
Add to My Group(s)
Go To Commenting
The views expressed herein are the sole responsibility of the author and do not necessarily reflect those of this website or its editors.