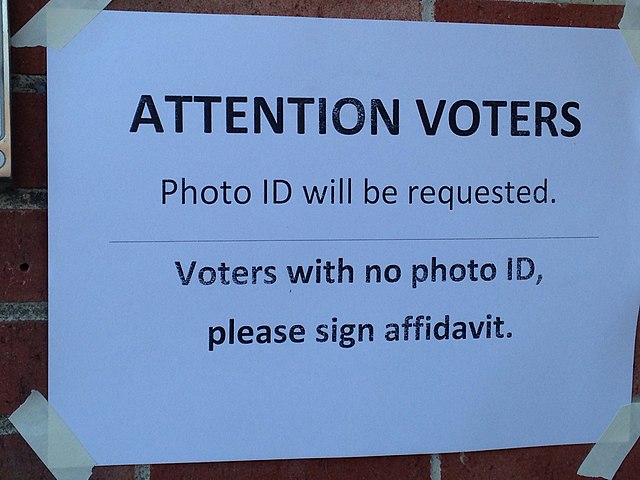 On Sunday, White House Senior Adviser Stephen Miller claimed 14 percent of non-citizens are registered to vote. "We know for a fact, you have massive numbers of non-citizens registered to vote in this country," he said, appearing on ABC's This Week With George Stephanopoulos. "The White House has provided enormous evidence with respect to voter fraud."

Miller is repeating an assertion Trump continues to make.

It is absolutely false.

What do we do when we have a president and White House surrogates, along with enablers in the right-wing media, who continuously lie about something as fundamental to our democracy as whether we've got massive voter fraud?

The answer is we find the truth. We spread the truth. We continue to speak the truth. And we use every chance we have -- in opeds, in letters to editors, in local media, on national media -- to state the truth.

And we demand that big lies like this be corrected.

A new report on voter fraud from the Brennan Center confirms that multiple nationwide studies have uncovered only a handful of incidents of non-citizens voting.

Based on state prosecution records, votes by non-citizens account for between 0.0003 percent and 0.001 percent of all votes cast.

Election officials agree that non-citizen voting in our elections is not a problem. The National Association of Secretaries of State, whose Republican-majority membership includes the chief elections officers of 40 states, said they "are not aware of any evidence that supports the voter fraud claims made by President Trump."

Federal law and the laws of every state bar non-citizens from registering to vote or voting in elections. Experts believe that the severity of the penalties for violating these laws serve as a significant deterrent. Also, it is relatively easy for a non-citizen to get caught.

Trump's false assertion of massive voting fraud is intended for one purpose: to legitimate more voter identification laws around the country.

Voter identification laws are already spreading rapidly. Before 2006, no state required photo identification to vote on Election Day. Now, 10 states have this requirement. All told, a total of 33 states -- representing more than half the nation's population -- have some version of voter identification rules on the books.

The purpose of these laws is to further entrench Republican officials.

New research shows a significant drop in minority participation when and where these laws are implemented -- which is what you would expect given that members of racial and ethnic minorities have less access to photo IDs.

The research also shows that because minority voters tend to be Democrats, strict voter ID laws tilt the primary electorate dramatically. The turnout gap between Republicans and Democrats in primary contests more than doubles from 4.3 points to 9.8 points.

One of the most important common goods in our society is the truth about our democracy. Trump is pulverizing that truth -- laying the groundwork for more state restrictions on access to the ballot by American citizens.

This is beyond shameful.

Related Topic(s): Fraud; Republican; Trump Presidency; Truth; Voting, Add Tags
Add to My Group(s)
Go To Commenting
The views expressed herein are the sole responsibility of the author and do not necessarily reflect those of this website or its editors.