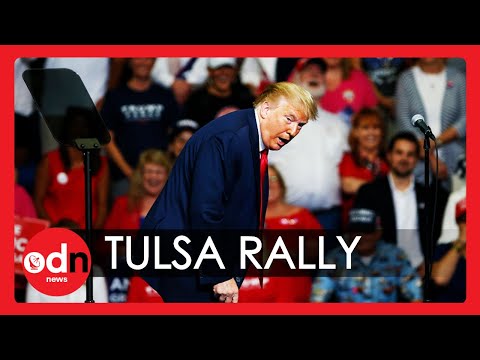 Imagine if Adolf Hitler had staged one of his infamous 1930s fascist Nuremberg hate-fests ... and the stands were less than full, his speech fell flat, his flawless phalanxes dissolved into chaos, the fighting flags failed to unfurl.

That's what just happened to Trump in Tulsa. The implications are Earth-shattering.

When Hitler staged his ritual witch burnings, the masses were hypnotized. The synchronized film crews, the adoring media, the groveling sycophants, the murderous hate-the-Jew mobs " all were perfectly in place.

In apocalyptic unison, the Silent Majority (his phrase) panted for Der Fuhrer to Make Germany Great Again (also his phrase). They goose-stepped in precision, all decked out in their fascist finest ... the jackboots, the armbands, the billowing banners, the iron formations, the buzzcut hairdos ... willing executioners flocking to Stalingrad and Auschwitz.

There were no empty seats. Every inch of every stadium was packed to the gills.

Take a look at Triumph of the Will, or google up random clips of Schicklgruber's pathetic pageants and see if you doubt the coming Holocaust.

He'd mock the infirm, whistle the dog, taunt the libs, deny the virus. Waves of bloodlust would flow from his lips and rise from the grassroots.

Mass beatings would boil the blood. Packed to the rafters, no masks to be seen, the stadium would rock to His charisma. The loyal millions would rally to Donald and his dictatorship for life.

Just the fall election stands in his way. Tulsa would surge him back toward a groundswell blitzkreig.

But just one problem: The Donald laid a MEGA-Egg.

Related Topic(s): Hitler; Rally; Trump Against Democracy; Trump Anger; Trump Bigotry; Trump Broken Promises; Trump Idiot-in-chief; Trump Mental Health; Trump Untrustworthy, Add Tags
Add to My Group(s)
Go To Commenting
The views expressed herein are the sole responsibility of the author and do not necessarily reflect those of this website or its editors.