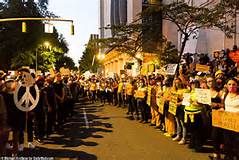 Trump's reasoning for deploying masked militia men into the suburbs of liberal cities run by Democratic mayors is said to be to frighten and hopefully to scare suburban women into voting for him again. Trump's plan suffered a set-back when concerned mothers created the group called "Wall of Moms" to stand between protesters and Trump's Militia. But recently a new group of supporters--Veterans-- has joined up with the protesters and the "Wall of Moms." This must have been a gut-punch to Trump's latest outrageous political stunt.

Portland Mayor Ted Wheeler was himself recently tear-gassed as he spoke out against the federal government's infringement on state's rights. Federal troops had not been requested, prompting Mayor Wheeler to call for their immediate removal from Portland.

It has become clearer and more evident by the day that Trump's biggest enabler Attorney General William Barr and Trump himself are playing out the POTUS's long-held fantasy of being a fascist dictator. By doing this, he creates his own personal militia with his ultimate goal of slaughtering the Constitution and tearing down the separation of powers, and thereby destroying our democracy for his own selfish gains.

The picture that the POTUS wants us to see as these troops take to the streets is one that evokes fear in our hearts as we watch it play out day after day on television. We see images of the unnamed "secret police" or as I call them Trump's Militia, who seem to be at the beck and call of either A.G. Barr or of Trump himself.

What has been observed by those present during some of these confrontations is that Trump's Militia has escalated and prompted the confrontations that all of us have observed. By showing the protesters being assaulted with tear gas and even rubber bullets, I suppose it serves as some type of warning.

Trump has defended his use of force in Portland where it has also been reported that protesters have been hauled off in unmarked cars and vans without being told why. This act seems way too Banana Republic to happen in America, but here you have it. The POTUS called the protests in Portland, a liberal Northwest city in America, "worse than Afghanistan," as was reported by MSNBC news.

It was a different time then. Our country was in the quagmire known as the Vietnam Conflict and people were angry at the government and at the Nixon propaganda machine of that day.

Today it seems that the Trump Militia is just one more dangerous shiny object, frequently used to annoy voters and distract them from so much bad news, all attributable to the misdeeds of Trump, and reminding him of all of his failures over the last three and a half years.

Trump is playing on the fears of white suburban voters by using the political tool of racism and targeting cities run by Democratic mayors by sending in these secret police or Trump Militia in order to scare people into voting for him again against their own best interests. Trump even tweeted out that he was protecting "suburban housewives," whatever that means, from the destruction of their neighborhoods, which is much more obvious than a dog whistle. It is blatantly racist.

This smells a bit like martial law right in the middle of an election year. Weeks ago these federal officers went into Portland, Oregon, without being asked. Everyone is right to be suspicious of everything this administration does. Other cities that are considered liberal and run by Democrats are on Trump's list to attack such as Chicago, Albuquerque, Seattle and others.

I really don't believe that Trump ever imagined that veterans would show up and support the protesters. Duston Obermeyer told the New York Times that they were "there to ensure our citizens did not have this right to free speech and their right to protest and right to assemble taken away from them. It is clear that the veterans who showed up were there to protect the Constitutional rights that every protester has.

This is just one more example of Trump playing games with our lives, but instead of an out of control virus, we have militia on the streets attacking our women and children. Should we be afraid that they will be standing outside of our polling places on November 3rd?

The DOJ is opening up an investigation into whether excessive force was used or inappropriate behavior was invoked by these agents in Portland, or in Washington D.C. during the protests there. Our constitutional right to protest is on the line here. Our rights are being violated.

Related Topic(s): Democracy; Trump; Trump Against Democracy; Trump And Barr; Trump And Eptstein Gawking Over The Hot Ladies; Trump Dangerous; Wall Of Moms, Add Tags
Add to My Group(s)
Go To Commenting
The views expressed herein are the sole responsibility of the author and do not necessarily reflect those of this website or its editors.