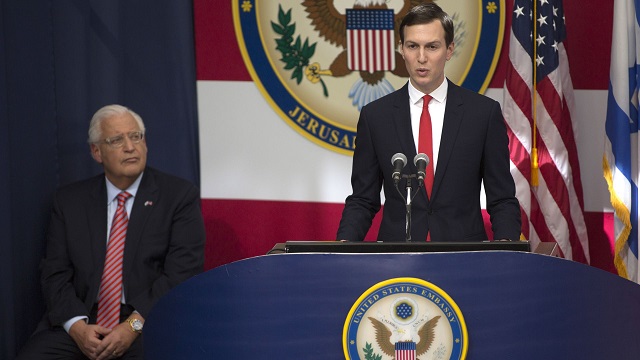 The June 25-26, 2019 "peace conference" scheduled for Manama, Bahrain and attended by the United States, Israel, a few Palestinian quislings, and sell-out Arab states is nothing more than a rubber stamp on the future virtual annexation of the West Bank by Israel. The so-called "peace plan," which has been dubbed the "deal of the century" by Donald Trump, had no Palestinian input, but was crafted by Trump son-in-law Jared Kushner, Trump's "special envoy" for International Negotiations Jason Greenblatt, US ambassador to Israel David Friedman, and Kushner aide Avi Berkowitz. Greenblatt and Friedman were formerly lawyers for the Trump Organization.

The "Kosher Quartet" of Kushner, Greenblatt, Friedman, and Berkowitz, all Orthodox Jews who support Israeli Prime Minister Binyamin Netanyahu and the far-right elements of the Likud Party and its allies, have designed a plan that will see Israel's satellites in the Gulf Saudi Arabia, the United Arab Emirates, Bahrain as well as Egypt, Jordan, and Morocco ante up billions of dollars for "economic development" of the West Bank that will see a virtual Israeli annexation of the territory by paying Palestinians for their land and infrastructure.

Trump's "deal of the century" is for a new Palestinian diaspora, one that will see Hebron, Ramallah, Jericho, Nablus, Bethlehem, Qalqiliya, Tulkarm, Jenin and other cities depopulated by Palestinians, who will be offered asylum in the Gulf states and a Saudi-planned $500 billion supercity in northwestern Saudi Arabia, Jordan, southern Israel, and Sinai called "NEOM." With their "exit wealth" and college degrees, the Palestinians are viewed by MbS and Kushner as optimal residents of NEOM, planned to be 30 times larger than New York City. As for the West Bank, the plan is for it to be repopulated by Jews from Israel proper, illegal Israeli settlements already in the West Bank, and abroad.

Even US Secretary of State Mike Pompeo downplayed the success of the "peace plan" as "un-executable." He told the Conference of Presidents of Major American Jewish Organizations that Kushner's plan "may be rejected." Pompeo later walked back his comments while accompanying Kushner to the British state dinner for Trump in London. On the way to London from the Middle East, Kushner and Pompeo stopped off in Montreux, Switzerland to attend the secretive annual conclave of the Bilderberg Group.

Pompeo's comments came at about the same time Kushner, in a rare interview with the press, said the Palestinians are not capable of governing themselves, which really means that his plan sees continued Israeli subjugation over Palestinians who do not accept the sale of their birthright in exchange for Gulf money. Kushner's plan is nothing more than what might be expected from the son of one of New Jersey's and New York's shadiest real estate tycoons and "slum lords," Charles Kushner, a federal ex-convict who served a nearly two-year prison term for illegal campaign contributions, tax evasion, and witness tampering.

Kushner also said that it was not his role in brokering a peace agreement for the Palestinians to trust him. That may have been the only truthful thing Kushner said in the interview with Axios. The Palestinians have absolutely no reason to trust Kushner after the Trump administration took several steps to marginalize the Palestinian Authority, including the closure of the US consulate general in Jerusalem, the moving of the US embassy from Tel Aviv to Jerusalem, cutting off millions of dollars in direct assistance to Palestinians and via the United Nations Relief and Works Agency for Palestine Refugees in the Near East (UNRWA), and Friedman claiming that Israel is "on the side of God." Trump's recognition of Israel's sovereignty over Syria's Golan Heights did nothing to assuage the concerns of the Palestinians, who saw it as a possible prelude to Israel's re-annexation of the Gaza Strip, Israel's very own "Warsaw Ghetto" for Palestinians subject to blockades, sanctions, and Israeli military aggression.

Kushner told Axios that he sees a stark difference between the Palestinian leadership and the Palestinian people. In fact, the State of Palestine, which is governed by the Palestinian National Authority, is recognized by 137 members of the United Nations and holds non-member observer status in the UN.

While the stance of the lavishly pro-Israeli Trump administration on Palestinian self-determination is no surprise, those of Saudi Arabia, the UAE, and Bahrain point to Israel's growing influence in the Gulf as the Israeli-Gulf Arab alliance against Iran becomes more militant. The Saudis and Emiratis are now close intelligence partners of the Israelis, even relying on Israeli surveillance software to track opponents of their regimes at home and abroad. Israeli, American, Saudi, Emirati, and Jordanian military officers regularly meet in joint war rooms to carry out static military operations against Iran. One such war room is said to be in Eilat, Israel and another, across the border, in Aqaba, Jordan. Among the exercises performed is the disabling of Saudi air defenses to allow Israeli aircraft to pass through Saudi airspace in an attack on Iran. UAE military officers have participated in air training exercises with Israeli pilots in Greece and Israel.

Saudi officials directly responsible for the grisly murder and dismemberment of Saudi journalist Jamal Khashoggi, a US permanent resident, in the Saudi consulate-general in Istanbul reportedly met secretly with Israeli intelligence officials. Jared Kushner also reportedly expressed no opposition to MbS's plan to eliminate Khashoggi, a frequent critic of Saudi policies, including its cooperation with Israel against the interests of the Palestinians.

Joining the Saudis and Emiratis in selling out the Palestinians to the Israelis has been Bahrain, a virtual puppet state of Saudi Arabia that also hosts the headquarters of the US Fifth Fleet. Bahrain's Shi'a Muslim majority, long oppressed by the Wahhabi Sunni Al Khalifa monarchy, was brutally suppressed in 2011 with the assistance of Saudi military forces. Manama has reportedly welcomed Israeli government visitors. The Bahraini Nonoo family, of Iraqi Jewish descent, has seen its members appointed to key Bahraini government positions, including ambassador to the United States and to a seat in parliament.

Two Gulf nations opposed to the Saudi-Emirati-Israeli alliance are Qatar and Oman. Qatar has withstood a brutal Saudi and Emirati economic and diplomatic blockade, supported by the Trump administration, Israel, and Egypt. The Saudis and Emiratis subjected Qatar to a massive cyber-attack and fake news campaign. The anti-Qatar campaign was also assisted by veterans of the Israeli and American signals intelligence and cyber-warfare agencies, Unit 8200 and the National Security Agency (NSA), respectively. US Secretary of State Rex Tillerson was, in part, fired by Trump over Tillerson's refusal to agree to Jared Kushner's tough line against Qatar. Kushner's attitude was influenced by Qatar's rejection of a request by Kushner's father to the head of the Qatar Investment Authority for it to financially bail out the Kushners' failing building at 666 Fifth Avenue in Manhattan. Qatar's good relations with Iran, as well as its contacts with the Houthis in Yemen and Hamas in Gaza made it target number one for the Israelis and their friends in the Gulf and in Washington.

Oman also maintains good relations with Iran and its stance resulted in a 2018 highly-publicized trip to Muscat by Netanyahu for a meeting with ailing Sultan Qaboos bin Said. Oman refused Netanyahu's demand that it change its policy toward Iran. Neither Qatar nor Oman are favorable to the Kushner "peace plan" for the Palestinians.

One can imagine the outrage from the likes of Kushner and other members of the powerful Israeli lobby in the United States if a future Democratic president appointed the following four US Representatives: Palestinian-American Rashida Tlaib, Somali-American Ilhan Omar, Syrian-American Justin Amash, and Lebanese-American Donna Shalala to be in charge of negotiating a Palestinian-Israeli peace agreement. The "usual suspects" would cry foul. Where are those cries now with the perfidy now at play with the Manama conference and Trump's "Kosher Quartet?"