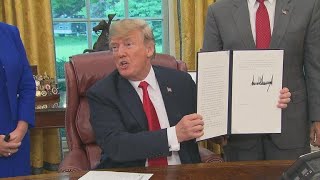 Our "I alone can fix it" president has gotten us in another fix, all right.

He had admitted as much the other day when he was in Singapore for his summit with North Korean dictator Kim Jong Un and bragged about the great deal he imagined he had made: "I may stand before you in six months and say, 'Hey, I was wrong.' I don't know that I'll ever admit that, but I'll find some kind of an excuse." He was, in his gruesome way, joking, but many a truth in jest, etc.

Just this week, The Daily 202, the compendium of political news from the Washington Post, made a list of some of the many times Donald Trump has tried to avoid responsibility -- when he ended DACA, when Congress failed to completely scuttle Obamacare, when anti-gun violence legislation failed to pass, when the tax cut plan was in danger, when a failed covert operation in Yemen cost the life of a Navy SEAL.

"Time and time again, the president has sought to shift the blame for his own decisions and their consequences to his political opponents," James Hohmann wrote. "He's doing it again this week by falsely blaming Democrats for his own policy of forcibly separating migrant children from their parents at the border, which he could stop with one phone call."

Children in detention camps without their mothers and fathers, the youngest in "tender age" facilities -- now there's a tawdry, Orwellian use of a loving word like "tender" if ever there was one. At first, Trump saw this inhumane fiasco as a success while simultaneously claiming it wasn't his fault, pointing his stubby little fingers at everyone else; Democrats, Congress, the courts, Obama, of course, and even George W. Bush.

But at bottom, and I do mean bottom, Trump, such White House horrors as Stephen Miller, John Kelly, Attorney General Sessions, Homeland Security Secretary Kirstjen Nielsen and their compliant cronies are responsible and have been willing to lie to us time and again as they held babies hostage to Trump's obsession with his stupid border wall.

commondreams.org is a progressive publisher
Related Topic(s): Health; Housing; Inequality; Nationalism; Poverty; Trump Apologists; Trump Broken Promises, Add Tags
Add to My Group(s)
Go To Commenting
The views expressed herein are the sole responsibility of the author and do not necessarily reflect those of this website or its editors.