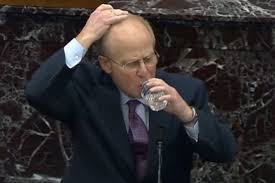 On Monday one of Donald Trump's Orthodox Jewish lawyers, David Schoen, spoke on Trump's defense on the floor of the US Senate, during part of Trump's impeachment trial. While speaking, Schoen would pause to get a drink of water. While drinking from a bottle of water, he would put his other hand on top of his head (pictured above). People started posting comments on Twitter and Facebook making fun of Schoen's strange behavior.

A progressive Jewish group, Bend the Arc, tweeted, "It is Jewish ritual, not an odd behavior to be mocked."

In reality it is both a Jewish ritual and an odd behavior. Religious rituals, including Jewish rituals, are often nonsensical, foolish and, on occasion, dangerous and harmful, and even deadly. They definitely do not deserve respect from rational people.

The Jewish ritual of kapparot, which means atonement, is another act of strange behavior in which a religious Jew swings a live chicken over their head while reciting a prayer three times which states the chicken, which will allegedly be given to charity, is in exchange for the sins committed by the chicken swinging religious Jew.

Self-flagellation, in which the faithful inflict bodily pain and harm on themselves is part of several rituals from the various branches of the man-made Abrahamic "revealed" religions. This involves everything from a believer crawling on their knees until their knees are bloody, to whipping themselves bloody with whips and chains with sharp blades attached to them.

One ungodly, repulsive and nonsensical religious ritual is circumcision, and in particular the circumcision ritual known as metzitzah b'peh, which is practiced primarily by Orthodox Jews. During this ritual the rabbi/mohel performing the circumcision of an eight-day-old Jewish boy uses his mouth to directly suck blood from the mutilated penis of the infant. This has caused the deaths of Jewish babies, as well as brain damage due to the victims being infected with herpes by the rabbi/mohel. Like Christians who practice Biblical faith healing which causes harm to and the deaths of innocent and helpless children, the religious Jews who practice the ritual of metzitzah b'peh are secretive and don't have much interaction with the outside world, so the number of child victims is probably much higher than what's reported.

The French Deist Voltaire pointed out that it is dangerous to allow people to convince you to believe foolish things. Voltaire wrote:

Truly, whoever is able to make you absurd is able to make you unjust. If the God-given understanding of your mind does not resist a demand to believe what is impossible, then you will not resist a demand to do wrong to that God-given sense of justice in your heart. As soon as one faculty of your soul has been dominated, other faculties will follow as well. And from this derives all those crimes of religion which have overrun the world.

This is seen in religious rituals from putting your hand on top of your head while drinking, to swinging a chicken over your head, to crawling on your knees until bloody, to thinking God wants you to circumcise a healthy infant and then suck blood from the wound.

Thomas Paine gave us the obvious solution to the problem of the harm done by the "revealed" religions. In The Age of Reason, The Complete Edition, Paine wrote:

Nonsense ought to be treated as nonsense, wherever it be found; and had this been done in the rational manner it ought to be done, instead of intimating and mincing the matter, as has been too much the case, the nonsense and false doctrine of the Bible, with all the aid that priestcraft can give, could never have stood their ground against the divine reason that God has given to man.

Without being honest and recognizing things for what they really are, and pointing those facts out, we cannot make progress. Society will be forever stuck in the rut of "revealed" religion and suffering the consequences of the harmful and deadly nonsense they propagate. It's up to Deists to make a better world by taking the bull by the horns and correcting this situation. Just as there are real consequences in actions, there are also real consequences in inaction. Albert Einstein told us we need to take the action of changing our beliefs. He wrote,

Deism is that "new manner of thinking" humanity requires for its survival.

Bob Johnson is a paralegal and a freelance writer in Florida. He was raised Roman Catholic, but after reading Thomas Paine's The Age of Reason, he became a Deist. In 1993 he founded the World Union of Deists and in 1996 he launched the first web (more...)
Related Topic(s): Beliefs; Bible; Circumcision; Deism; Einstein; God; People; People; Reality; Religion; (more...) Thinking; Trump; Trump Religion, Add Tags  (less...)
Add to My Group(s)
Go To Commenting
The views expressed herein are the sole responsibility of the author and do not necessarily reflect those of this website or its editors.