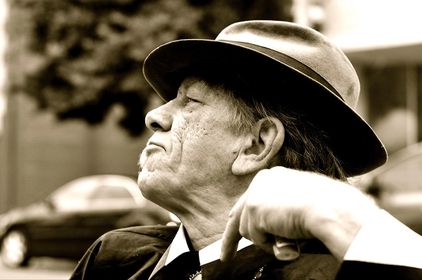 Trump makes my neck red
(Image by self)   Details   DMCA

Did you watch the debate between the incumbent president and Joe Biden, the former Vice President?

Well, Trump cleaned his own clock again. More quietly, but he still talked over the moderator half a dozen significant times with old lines, and over Biden a few times more.

Biden's delivery was almost completely decorous, though not without emotion. He did not talk over Trump at all; time after time the camera was careful to catch Biden with a huge grin that nearly shouted, "there he goes again!" as Trump continued to blurt out his whoppers and his attacks.

His hardest counterpunch was in the truncated foreign policy section, when he pointed out that Trump has had a Chinese bank account since 2013. Trump said it was closed in 2015, but CNN's top fact-checker Daniel Dale says it is open today. After that, Trump had no words about Biden's "corruption;" he had to content himself with asking why Biden hadn't accomplished already what he intended to do as President.


It was also much more substantive. Unlike Trump, Biden actually talked about plans and programs.


Trump made no statements which showed he had any vision for the next four years, and clearly demonstrated that for him, climate change was not only a thing not to be feared, but that the votes that voters currently in the fossil-fuel energy industry-- "Pennsylvania? Texas? Oklahoma?" might cast were more important to him than the national or planetary environment.

However, Trump's answers about the separation of parents and children were particularly callous, even by Trumpian standards. I was waiting to hear Trump come out with anything that showed compassion or empathy; I waited in vain.

There are very few undecided voters left, maybe 2-3 percent, 11 days before the election. They haven't numbered 10 percent since the Conventions.


Trump aimed his message directly and specifically to his far-right-yahoo base (having seen clear signals that Wall Street is preparing itself to detach from him). Biden made sure that the American People knew he was talking to them.


What did not come up? Neither Trump nor Welker made any mention of Supreme-Court-packing. Welker's questions never went there, of course, but many pundits had predicted that since the issue came up in the first debate, Trump would try to prod Biden for an answer about it.


Trump also made no attempt to court the suburban women that he has so plainly turned off (and doesn't like anyway: "I saved your damn neighborhoods, okay?" is not the statement of a man who was really glad to do what he says he did for the people he says he did it for), except for the one-issue pro-life ones.


Biden winning by 10 percent in popular vote, straight-up on the handling of the coronavirus, setting aside all other voters' considerations, seems reasonable, and that will probably be a large enough margin to dissuade some of Trump's army of lawyers from challenging.


However, due to the distortions caused by the Electoral College process, Biden may win only low 300s in that, and thence would be the grounds for any diehard challenges in this state or that to the result.

Related Topic(s): Joe Biden 2020 Campaign; Joe Biden And Donald Trump; Second Debate; Trump Against Climate Change; Trump Against Democracy; Trump Attacks Joe Biden; Trump Campaign; Trump Hates Immigrants, Add Tags
Add to My Group(s)
Go To Commenting
The views expressed herein are the sole responsibility of the author and do not necessarily reflect those of this website or its editors.