"That should be a grave concern to anyone who cares about an informed citizenry." 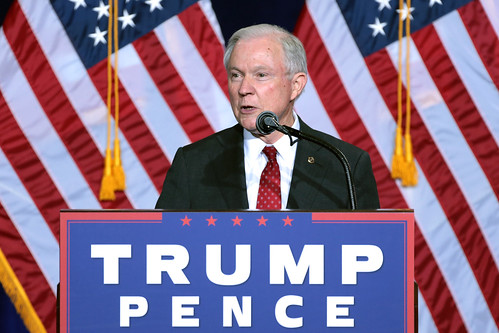 .All leak investigations -- whether they directly target reporters or not -- are a grave threat to press freedom..
(Image by Gage Skidmore)   Details   DMCA

In an aggressive escalation of its already disturbing crackdown on leaks, Trump's Justice Department secretly obtained a year's worth of phone calls and email records of Ali Watkins, a New York Times reporter who previously covered national security issues for Buzzfeed.

As the New York Times reported on Thursday evening:

"Investigators sought Ms. Watkins's information as part of an inquiry into whether James A. Wolfe, the Senate Intelligence Committee's former director of security, disclosed classified secrets to reporters. F.B.I. agents approached Ms. Watkins about a previous three-year romantic relationship she had with Mr. Wolfe, saying they were investigating unauthorized leaks."

The phone and email records seized by the government, which Watkins was notified about after the fact and was therefore unable to challenge in court, included "those associated with her university email address from her undergraduate years," according to the Times.

The New York Times released a statement saying, "This decision by the Justice Department will endanger reporters ability to promise confidentiality to their sources and undermine the ability of a free press to shine a light on government actions. That should be a grave concern to anyone who cares about an informed citizenry." Buzzfeed editor in chief Ben Smith tweeted, "We are deeply troubled by what looks like a case of law enforcement interfering with a reporter's constitutional right to gather information about her own government."

At virtually the same time the New York Times story broke, the Justice Department announced it has indicted Wolfe for allegedly lying to investigators about his contact with reporters, but at least so far, has not charged him with leaking any alleged classified information.

The indictment of Wolfe released by DOJ -- which, as always, should be taken with a huge grain of salt -- mentions at least three other unidentified reporters. The indictment contains the content of conversations Wolfe allegedly had with multiple reporters on Signal, an encrypted messaging application. It's unclear at this time whether those unidentified reporters had their phone and email records directly surveilled as well.

Related Topic(s): Email Leaks; Journalism; Justice Denied; Justice Department; Phone Hacking; Reporters; Surveillance, Add Tags
Add to My Group(s)
Go To Commenting
The views expressed herein are the sole responsibility of the author and do not necessarily reflect those of this website or its editors.