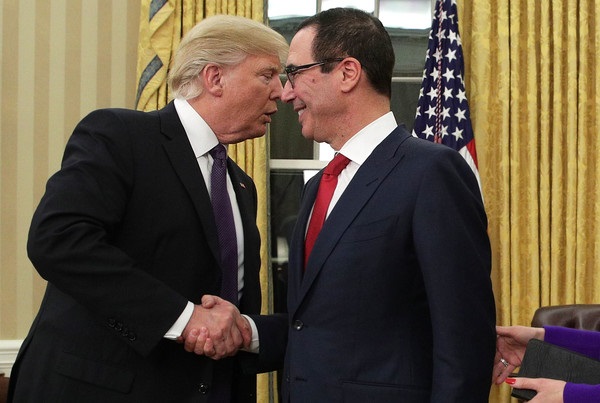 Mnuchin and Trump the motto is 'what's mine is mine and what's yours will be mine'
(Image by zimbio.com)   Details   DMCA

With former Bear Stearns executive David Malpass heading up the World Bank and one-time Goldman Sachs executive Steve Mnuchin as Secretary of the Treasury, Donald Trump and his coterie of grifters are in prime positions to plunder the wealth and natural resources of countries around the world. Both Malpass and Mnuchin are hedge fund managers. Exploitation of faltering national economies and buying up state-owned resources are a major specialty of hedge funds.

Also, of note is the fact that Malpass's late father-in-law, Herman Obermayer, was a key figure in several pro-Israeli organizations, including the Jewish Institute for National Security Affairs (JINSA), the Jewish Policy Council, and the National Council of the American Jewish Committee (AJC). Israel can be expected to have influence at the World Bank unseen since arch-neocon Paul Wolfowitz was president of the organization. Malpass, on record as a strong critic of the World Bank, is also known to be anti-China.

Malpass has criticized China's "One Belt-One Road" (OBOR) initiative of global infrastructure improvement and is continuing previous efforts by the United States to curtail increased Chinese voting power within the World Bank's board of governors.

Although China is now the world's largest economy, it is only the third-largest World Bank shareholder, at 4.5 percent, after the United States and Japan. China has been demanding a greater percentage of the shares in the World Bank, something that Malpass, with Trump's encouragement, is resisting.

As long as China provides infrastructure loans to various countries and finances development projects either directly or through its Shanghai-based New Development Bank (NDB), a rival to the World Bank, Mnuchin's and Malpass's friends in the distressed debt vulture hedge fund industry will be stymied by Beijing. Currently, there is a major psychological warfare effort being waged against China and its OBOR initiative, which claims that Chinese bankers are putting other countries in extreme debt, with racism and the "yellow peril" figuring heavily into the propaganda equation. This propaganda blitz is particularly acute in Kenya, Tanzania, Djibouti, and Ethiopia.

China can point to the excesses of Wall Street vulture capitalists like Carl Icahn, Leon Cooperman, and Paul Singer, all Trump supporters, the latter being instrumental in looting the treasuries of Argentina, Puerto Rico, and the Democratic Republic of Congo.

Currently, Venezuela is the prize for Malpass, Mnuchin, and their vulture capitalist friends on Wall Street. Malpass is pushing for the World Bank to recognize the Central Intelligence Agency-backed pretender to the Venezuelan presidency, Juan Guaido, as the leader of Venezuela and accord his representative Venezuela's seat on the World Bank. The same effort is underway at the International Monetary Fund (IMF), with the urging of Mnuchin. The selling off of Venezuela's state-owned oil company, PdVSA, to Malpass's and Mnuchin's vulture capitalist friends will be the first step in sucking the life blood out of Venezuela's poor and middle class population and the looting of the nation's gold and cash reserves.

In Libya, Field Marshal Khalifa Hifter, a U.S. citizen and CIA asset, is about to seize the capital of Tripoli from the United Nations-backed government. Hifter is supported by the U.S., Egypt, Saudi Arabia, and the United Arab Emirates. In anticipation of Hifter's complete takeover of Libya, Booz Allen Hamilton, a Wall Street-linked "efficiency consultancy" and U.S. intelligence community contractor, has moved in to help "privatize," a nice word for loot, the National Oil Company (NOC) of Libya. Booz Allen's people moved in after Hifter's forces captured the Sharara and Elephant oil fields last month. Meanwhile, Malpass's World Bank team has its eyes set on the Libyan Investment Authority (LIA), the country's sovereign wealth fund.

Trump's hedge fund vultures on Wall Street are also heavily involved in picking at the carcass of Ethiopia's state-owned telecommunications company, Ethio Telecom, as it is privatized by the government.

The same situation is playing out with the Trump grifters from Myanmar and the Philippines to Mozambique and Ecuador.

In the world of Malpass, Mnuchin, and Trump the motto is "what's mine is mine and what's yours will be mine."

In the Star Trek series, the Borg were a collectivized half-biological, half-robotic species whose only purpose was to invade planets and exploit their resources until they were nothing more than industrialized waste dumps. Trump, Mnuchin, Malpass and their vulture hedge fund financiers will, if given the opportunity, do the same to our planet.