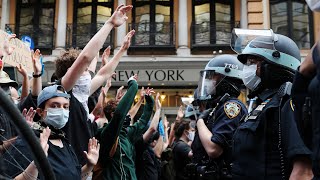 The backlash against Donald Trump's illegal show of military force against anti-racist protesters compelled him to withdraw the troops for now. But we must continue raising the illegality of this use of the military and pushing for barriers to guard against future such deployments. The threat of a resurgence of this violation still looms because as the protests continue, Trump might change his mind. And if he loses the election, all bets are off.

Government officials, legislators, lawyers and civil society should strenuously oppose the recall of federal troops because it would be deadly as well as illegal. "Armed forces taking on protesters may cause them to go away, but make no mistake: People would die. And even one more death is too many," Kelsey Baker, a former Marine who deployed to Kuwait and Iraq, wrote for Newsweek.

Although Trump didn't invoke the Insurrection Act to justify his deployment of troops against Black people and their allies, he may well do so in the future. A review of how Trump ordered military personnel to Washington, D.C., is instructive and alarming.

As the collective outrage at the police lynching of George Floyd filled streets nationwide, Donald Trump threatened to use the U.S. military against anti-racist protesters exercising their First Amendment rights.

On May 28, Trump warned he would "send in the National Guard & get the job done right," tweeting, "...These THUGS are dishonoring the memory of George Floyd, and I won't let that happen. Just spoke to Governor Tim Walz and told him that the Military is with him all the way. Any difficulty and we will assume control but, when the looting starts, the shooting starts. Thank you!"

On June 1, Trump announced he had dispatched federal troops to Washington, D.C., "to protect the rights of law-abiding Americans, including your Second Amendment rights." Trump said he was ordering "thousands and thousands of heavily armed soldiers, military personnel and law enforcement officers" to the nation's capital.

The U.S. president sees the Movement for Black Lives as the enemy to be vanquished by his military. Trump's attempt to co-opt Floyd's memory and his appeal to his gun rights base were shameful.

"Donald Trump is the first president in my lifetime who does not try to unite the American peopledoes not even pretend to try. Instead he tries to divide us," former Defense Secretary James Mattis charged.

"All around the country, protests against police violence have been met with more police violence," Gerry Condon, former president of Veterans For Peace (VFP), told Truthout. "Calling in the Army and the National Guard, however, will make things worse not better."

Moreover, it would be illegal.

Trump challenged the nation's governors to deploy large numbers of National Guardsmen in order to "dominate the streets." Otherwise, he warned, "they're gonna run over you, you're gonna look like a bunch of jerks. You have to dominate." Secretary of Defense Mark Esper echoed Trump, telling the governors, "the sooner that you mass and dominate the battlespace, the quicker this dissipates and we can get back to the right normal."

Related Topic(s): Illegal Power; Military Deployed On US Streets; Military Deployment; Rebellion; Trump Against Democracy; Trump Bully In Chief; Trump Dangerous; Trump Racism, Add Tags
Add to My Group(s)
Go To Commenting
The views expressed herein are the sole responsibility of the author and do not necessarily reflect those of this website or its editors.