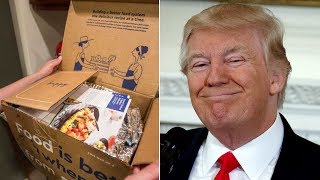 That's what the Trump administration called its plan to substitute prepackaged, low-quality processed foods for some of the food assistance currently being received by an estimated 46 million people (based on numbers for 2015, the last year for which data are available).

The term "harvest box" has been used by benign programs that distribute local produce like this one, and for USDA pilot programs in Maryland and Virginia designed to offer "seamless access to locally produced food and products" and to "boost rural economic development."

That's not the kind of "harvest box" Trump has in mind. People would not receive freshly harvested food under his administration's proposal. In fact, as farmers' groups have pointed out, it would hamper recipients' ability to buy fresh farm products at farmers' markets.

White House Budget Director Mick Mulvaney doubled down on this double-talk when he compared the proposed program to "Blue Apron," a high-end online service that delivers ready-to-cook gourmet meals to customers' homes.

Is that an apt comparison? According to its website, Blue Apron's menu for last week included "katsu-style wild Alaskan pollock with cabbage slaw and rice, soy-glazed Korean rice cakes with broccoli and soft boiled eggs," and "pork chops and balsamic-pear compote with fennel and sweet potatoes."

Trump's "harvest boxes," by contrast, would deliver "staple, shelf-stable foods (such as shelf-stable milk, juice, grains, ready-eat-cereals, pasta, peanut butter, beans, canned meat, poultry or fish, and canned fruits and vegetables)." These are low-quality, unhealthy foods whose "stability" depends on preservatives that have been shown to harm the human body. As the American Cancer Society notes, these preservatives can also have a carcinogenic effect.

Almost two-thirds of the people who receive federal food aid are c hildren, elderly, or disabled. But there are no foods on the proposed menu for infants or small children -- or, for that matter, for expectant or nursing mothers. Nor is any consideration given to the special dietary needs of certain disabled and older Americans.

A headline in Vox.com reads, "Trump wants to replace food stamps with food boxes, for some reason," even as a New York Times headline assures readers that the plan isn't "viable." It isn't: The packaging alone would drive up costs and wreak havoc on the environment. The lack of food choices would hamper public health. The challenge of delivering millions of boxes each week would create chaos.

But "viability" isn't the goal, and the administration's motives aren't that hard to discern. The Times article offers a glimpse of those motives, quoting unnamed administration as admitting that the idea "had virtually no chance of being implemented anytime soon." The officials characterized it, in the Times' words, as "a political gambit by fiscal hawks in the administration aimed at outraging liberals and stirring up members of the president's own party ""

"Outraging liberals" -- that is, trolling and provoking them -- is a major goal for Republicans in Trump's White House and on Capitol Hill, although it's not exactly clear why. It makes more sense to "stir up" Republican extremism, since that advances their agenda.

The proposal is also a work of misdirection. The "Blue Apron" pitch has received much more attention than the administration's primary goal: a brutal set of cuts to food programs that provide a lifeline to children, the elderly, the disabled, and other poor Americans.

But if you look beyond its menu, Blue Apron is a disaster. It has been fined for safety violations and faced reports of other labor problems. It's terrible for the environment, and it lost at least a quarter of a million customers last year.

Related Topic(s): Children; Disabled; Food; Harvest Box; Poverty; Racism; Trump Broken Promises; Trump Cruelty, Add Tags
Add to My Group(s)
Go To Commenting
The views expressed herein are the sole responsibility of the author and do not necessarily reflect those of this website or its editors.