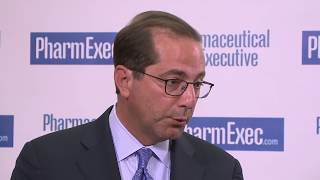 Nominating Alexander Azar to run Health and Human Services is like pinning a sheriff's badge on Billy the Kid. For all his polish and small-town charm, when it comes to pharmaceutical predation, the mild-mannered Azar puts blowhard "pharma bros" like Martin Shkreli to shame.

Shkreli is the pharmaceutical exec people love to hate. That's understandable. He sought out rights to drugs for rare diseases so he could extort outrageous prices from those whose lives depended on these treatments.

Shkreli became wealthy through his shameful strategy for extortion, but was convicted of defrauding investors in August. His smug narcissism and openly corrupt bullying made him an easy target, and a poster boy for pharmaceutical industry greed. The guy's face tells the whole story. He even reportedly paid $2 million for the only copy of a Wu-Tang Clan album just so that the group's millions of fans could never hear it.

Photos of Azar, on the other hand, usually display a warm and open smile. "Trust me," it seems to say. This small-town graduate of Dartmouth and Yale, who clerked for Supreme Court Justice Antonin Scalia, doesn't look or sound like a bare-knuckled capitalist. He might even make a fine dinner companion, capable of navigating both idle chit-chat and philosophical reflection with ease. He almost certainly orders the right wine, knows which fork to use, and never ever commits a faux pas over dessert and coffee.

He was a lobbyist, after all.

But when it comes to public harm, Azar puts Shkreli to shame. As horrible as Shkreli's misdeeds were, some will dismiss them as the rogue acts of a bit player. Azar, on the other hand, is the ultimate pharmaceutical industry insider: he has gone through the revolving door from government to lobbying several times to ascend to the helm of pharmaceutical giant Lilly USA.

Azar is the son of an opthamologist, and grandson of an immigrant from Lebanon. He ascended to partnership at a white-shoe DC law firm after working for Independent Counsel Kenneth W. Starr on the Whitewater investigation of President Bill Clinton. He then became General Counsel of HHS under President George W. Bush, where he supervised the agency's $1 trillion operations.

In 2007, he went directly from government service to become the top lobbyist for Lilly, where he could mine his government contacts for the Indianapolis-based drug manufacturer.

Lilly certainly needed friends in Washington at the time. As the Corporate Research Project's Phillip Mattera reports, Lilly has paid more than a billion dollars in criminal fines and settlements to the federal government and the states, as well as hundreds of millions to settle private lawsuits.

For decades, Eli Lilly has repeatedly been accused of concealing dangerous and even deadly side effects of some drugs and illegally marketing others for unapproved purposes.

In a foreshadowing of today's opioid crisis, Lilly's Darvon proved to be seriously addictive, and was eventually pulled from the market. As the New York Times reported in 1983, Lilly knew of at least 29 deaths in Europe caused by its arthritis medication Oraflex before it was approved for use in the United States. But it did not report those fatalities because, it claimed, "federal regulations did not require reporting of foreign deaths." Lilly eventually pleaded guilty to criminal charges in that case. Its former chief medical officer pleaded no contest.

Lilly was also compelled to pay $1.42 billion to settle a raft of lawsuits over misleading marketing of the anti-psychotic drug Zyprexa as an anti-dementia drug, a use for which it was not approved. This happened less than a month after it agreed to pay $62 million to settle similar charges regarding its marketing of the medication for pediatric uses. It was apparently equally willing to prey on the young and the elderly.

A Lilly sales rep even once placed golf bets with doctors to put patients on Zyprexa, according to documentation in a South Carolina suit. "...I got four pars out of nine holes," the Lilly rep wrote. "I said I wanted my four new patients."

Related Topic(s): Alex Azar; Health; Insulin; Medicine; Nomination; Pharmaceutical Industry; Trump Cabinet, Add Tags
Add to My Group(s)
Go To Commenting
The views expressed herein are the sole responsibility of the author and do not necessarily reflect those of this website or its editors.