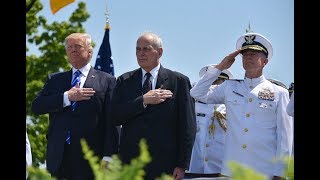 Senior White House official Rob Porter was forced to resign this week after allegations were made public that he had beaten both of his two ex-wives. The women were interviewed by the FBI as part of Porter's security clearance investigation and, once the story was out, they both spoke about the abuse to Politico.

Porter's actions were, and are, disgraceful and criminal. And there's something else disgraceful coming out of this episode. That's the blind support given to Porter by White House Chief of Staff John Kelly. Kelly knew for months that Porter was a domestic abuser and he did nothing about it other than to cover it up. Kelly showered Porter with effusive praise even after the allegations became public.

The mainstream media is finally beginning to question Kelly and his motivations. Remember, the former four-star Marine Corps general was supposed to be the "adult in the room" at the White House. He was supposed to keep Trump from being Trump. In fact, because he's no longer wearing the uniform, Kelly is now free to allow his own misogyny and racism to come out into the open. He no longer has a chain of command to worry about. Certainly he's not worried about the president's reactions.

Kelly started off his tenure in the Trump administration as secretary of Homeland Security, where he had virtually unlimited authority in everything from Customs and Border Protection to Transportation Security to the Secret Service and ICE. His move to the White House gave him even greater authority and routine, daily access to an unstable, racist, and narcissistic president.

We've all known since the transition period more than a year ago that Donald Trump liked to surround himself with generals. Why would a draft dodger surround himself with generals? Because generals go through their entire adult lives saying "Yes, sir." They were never trained to say, "Sir, let me tell you why that's a bad idea." I saw it during my years at the CIA. Generals were always the worst leaders. They always deferred to the policymakers. That's exactly what Trump wants. "My generals," he calls them.

Kelly's probably not the worst. General James Mattis, the Secretary of Defense, actually had to get a Congressional waiver in order to become secretary because we have a law in this country saying that a person must be out of the military for at least five years before assuming the top spot. It's because the Defense Department is supposed to be run by a civilian. The Founding Fathers and subsequent political leaders wanted it that way for good reason. It's because generals can't be trusted. Mattis is known by his nickname, "Mad Dog" Mattis. He didn't get that name by being a dog lover.

Another is H.R. McMaster, the National Security Adviser. Wildly popular among other generals, it is McMaster who literally wrote the book on 21st century warfare. It makes one wonder who is recommending to Trump a new "bloody nose" policy that ought to be just the right thing for North Korea. We're not already fighting enough wars, after all.

One general most Americans don't know about is Lieutenant General Mark Inch. Last August Trump named Inch as the director of the Bureau of Prisons. Why Inch? It wasn't his degree in biblical archeology. It was that he spent his entire career running military prisons. I'm not talking just about places like Leavenworth, where Chelsea Manning was incarcerated in conditions that the United Nations called "inhumane" and a form of "torture." I'm also talking about the network of secret prisons in places like Afghanistan and Iraq where crimes against humanity and war crimes were committed. Those were Inch's prisons.

Inch's appointment came only days after Donald Trump gave a speech on Long Island, where he admonished police officers to "get rough" with suspects and to not be "too nice" to those he called "thugs and animals." That's music to Inch's ears. Indeed, observers already say that he has turned the Bureau of Prisons into a quasi-military organization, at least in its attitude, if not in its formal command structure. It's the same leadership that Inch exhibited when he ran the Bagram Prison in Afghanistan during a period when a United Nations report said torture was taking place there. There was no fallout for Inch. He was promoted.

Greece had its own dalliance with generals between 1967 and 1974. It's called a "junta," a military dictatorship. When the generals are in charge, human rights and civil liberties go out the window. There is no respect for the person, for freedom of speech or association. There are wild accusations that anything not in line with military policy is "fake news." People die. Just ask the Greeks. They lived through it. And so did many other countries around the world. It's been proven time and time again that having generals in positions of power is bad for everybody.

But this is where Trump has brought us. We can't roll over. We have to resist those who would take away our rights. I can count the number of demonstrations I've marched in over my lifetime on one hand. That's changed. I'll see you in the streets. Our voices will only be heard if we take to the streets to block this president while we can and then oust him when we're able. Otherwise, before we even realize it, his generals will be running the place. Our democracy will never be the same.

Related Topic(s): Democracy; Generals; Military; Rights; Trump Cruelty, Add Tags
Add to My Group(s)
Go To Commenting
The views expressed herein are the sole responsibility of the author and do not necessarily reflect those of this website or its editors.