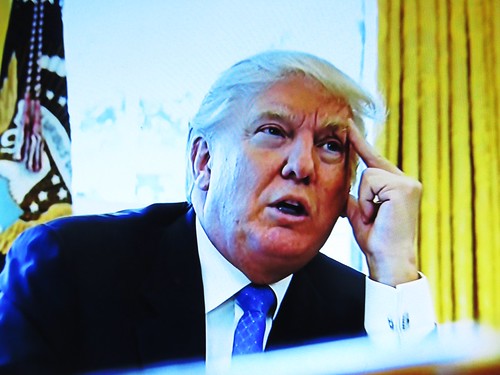 Two White House officials helped get Devin Nunes, the Republican chairman of the House Intelligence Committee, classified reports showing that Trump and his associates were incidentally swept up in foreign surveillance by American intelligence agencies, according to the New York Times.

One of them, Ezra Cohen-Watnick, is the senior director for intelligence at the National Security Council, and was formerly a Defense Intelligence Agency official who had been brought to the White House by Michael T. Flynn. The other, Michael Ellis, is a lawyer who works on national security issues at the White House Counsel's Office, and formerly worked on the staff of the House Intelligence Committee.

Why would these White House officials have supplied Nunes with classified information? What's really going on here?

To answer these questions you need to understand Trump's strategy for dealing with the one issue that could deal a lethal blow to his presidency -- the possibility that he or his aides colluded with Russian agents to win the election. Trump and his assistant, Steve Bannon, intend to wrap it in a thick partisan fog of diversion and obfuscation.

Remember, America's intelligence agencies have concluded that Russian agents interfered in the 2016 presidential election to benefit Trump. According to the ranking member of the Senate intelligence committee, such interference affected the outcome of the election.

It's the most serious and most direct attack on American democracy by a foreign power in history. If any of Trump's campaign advisers were involved, they would be guilty of treason. If Trump knew about it and did nothing, he would also have committed an impeachable offense.

Circumstantial evidence of Trump's advisors' collusion with Russian operatives has been building for months, including admissions by two of them -- Michael Flynn and Jeff Sessions -- that they lied when they said they hadn't been in contact with Russian officials during the campaign.

Trump's original strategy dealing with the growing threat to his administration was to berate the press for "fake news," condemn the intelligence agencies for unauthorized leaks, and hint darkly at plots against him.

Then on March 4, Trump tried a new tack. He alleged that Barack Obama wiretapped him in the Trump Tower during the campaign.

The claim had nothing whatever to do with the FBI investigation, but Trump is enough of a con artist to know it would divert attention. He could further confuse the issue by calling for an investigation by Congress's intelligence committees of whether Obama abused his executive power -- the same committees that were about to hold hearings about the FBI's investigation of possible collusion between Trump's aides and Russian operatives.

The media played right into Trump's ruse. Headline stories shifted from possible collusion between Trump aides and Russia to Trump's allegation against Obama, accompanied by stories about Trump's lack of evidence for his claim, Comey's request that the Justice Department publicly deny it, and White House surrogates' attempts to find sources for it.

So by the time the House Intelligence Committee held its hearing on March 20, the questions at issue already had become a vague mixture of Russian interference in the election, possible Trump adviser communications, intelligence leaks, and possible abuse of power by Obama.

Which is where Devin Nunes came in. Soon after the hearing, Nunes visited the White House to look at classified material suggesting that Trump's aides' conversations might have been "incidentally" collected during US surveillance of foreign nationals who were being lawfully monitored (presumably in connection with the FBI investigation of Russian interference in the election).

Related Topic(s): Donald Trump Lies; Intelligence; Leaks; Trump Illegality, Add Tags
Add to My Group(s)
Go To Commenting
The views expressed herein are the sole responsibility of the author and do not necessarily reflect those of this website or its editors.