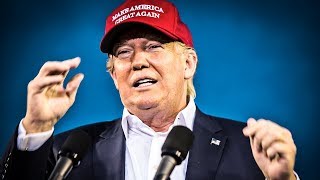 Donald Trump Believes That All Women Are Beneath Him And He Isn't Afraid To Show It
(Image by YouTube, Channel: The Ring of Fire)   Details   DMCA

Part I -- Female Support for a Really Nasty Guy

My hometown paper, the Philadelphia Inquirer, recently reported on a "Women's Rally for Trump." Appropriately enough, it took place at a casino -- the Valley Forge Casino Resort. The article was accompanied by a side piece, authored by Maria Panaritis, an Inquirer columnist, in which she interviews a number of the attending women. The crowd numbered about one thousand, and they all waved flags and wore baseball caps. And, oddly, they all enthusiastically cheered every time Donald Trump's name was mentioned.

It was odd because these ladies were cheering for a man who was publicly known to be, among other nasty things, a racist, a congenital liar, a misogynist with a history of abusing women, as well as someone lacking the intelligence and sensitivity to know that these things are ethically and morally wrong. While there is plenty of conjecture about why Donald Trump acts as he does, how are we to explain the attitude of his female supporters?

First, the race factor. Panaritis quotes one of the women at the Valley Forge rally -- a retired schoolteacher, no less -- as saying of Trump, "He's not afraid to say what he thinks. And what he says is what the rest of us are thinking." That is quite a revealing assertion. Considering that Trump had just a few days before made his infamous and bigoted "go back to where you came from" statement directed at four women of color in the House of Representatives, I think we can take a good guess at what this benighted schoolteacher was thinking. She is thinking white racist thoughts similar to those Trump had articulated. That might not be the only reason she supports him, but this assumption fits with her "we think what he says" claim.

It is also reasonable to assume that in a country where racial tensions have a long history, and where today there are over 165.92 million women, there are almost certainly several million of them who hold racist views. It is one way that some men and women can be very much alike.

Second, the confusion of opinion and fact. Some Trump supporters seem to follow the lead of the president by confusing their opinions for established facts. These include women as well as men. And all of them, being unaware that their opinions might not reflect facts, have little incentive to check if such differences exist. They might even feel resentful at any suggestion that their opinion does not correspond to truth. A good example of this sort of personality is Kellyanne Conway, inventor of "alternative facts" and expert practitioner of "verbal fog." An April 2017 essay in The Atlantic goes into great depth describing Conway's confusion in this regard and how, ironically, this helped make her one of Trump's senior advisers.

Along these lines, the Inquirer article quotes a woman at the Valley Forge rally who claims that "the Obama years were the hardest financially for her family." Of course, this does not necessarily mean, as she certainly assumes it does, that President Obama's policies were the cause of her family's distress. The real estate downturn she describes in her interview was a Bush-era spinoff. Then there is the fact that Obama inherited a financial crisis that began because of poor regulatory practices under preceding presidents. He managed to pull the country out of that crisis by bailing out floundering banks. However, to explain things this way runs up against the rally participants' "blood-red conviction" that President Obama is the villain and President Trump is the hero of this economic story. Most of the women present at the gathering agreed that "as soon as Trump came in, the economy thrived."

Third, the God factor and attendant issues such as abortion. Trump has no obvious religion, yet this seems not to make any difference to his assumed closeness to God. Panaritis spoke to "two born-again sisters from Berks and Chester Counties. "They spoke of Trump as God's chosen leader." Trump's ex-press secretary Sarah Sanders has expressed the same opinion. The two sisters said "they felt the world was on the path toward the Second Coming of Christ." Considering this path requires that the world experience a series of catastrophic events before the Second Coming, Trump's presidency makes a kind of malignant sense. Trump will no doubt encourage this religious constituency. Female fundamentalist supporters are being told "to talk to their church friends and neighbors about voting for Trump next year."

Then there are those who will support Trump because he takes a position against abortion. The women who are energized by this are mostly from the U.S. South and Midwest, and again, mostly believing Christians. They are not, however, the majority of voting women.

Up to this point we have been considering "qualities" of President Trump that attract women, and also happen to rally support among some men as well. However, our fourth probable answer to why some women are attracted to Trump might be gender specific. And this can be called, the sexual factor. We know that President Trump has been sexually abusive to women. As of January 2019, 17 women have publicly accused him of sexual misconduct. Trump says they are all lying about this. However, we also have a recording of Trump boasting of his behaving in just this abusive fashion. So who is lying?

Just like the women described above who have bought into Trump's racist message, I think it is fair to say that a certain number of president's female supporters have bought into the machismo sexual culture that he represents. It is well established that sex appeal can earn a candidate (man or woman) votes. Put that phenomenon together with Trump as a man of power, money and a libido that he wears on his sleeve, and result may be perversely appealing to some of his female supporters.

Apart from the subliminal sexual violence that clings to his coattails, Trump's messages to women are the same as to the men: this is a white nation, I have brought you economic good times, your God is in my corner, and intellectually and culturally, I am one with you. Trump believes that these messages worked for him in 2016. What about 2020?

Related Topic(s): Female Voters; Trump Apologists; Trump Non-stop; Women For Trump, Add Tags
Add to My Group(s)
Go To Commenting
The views expressed herein are the sole responsibility of the author and do not necessarily reflect those of this website or its editors.