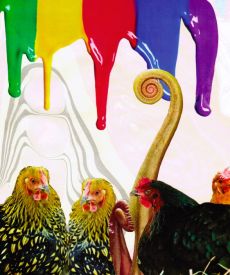 Only Chickens Fear The Rainbow
(Image by Akemi Ohira)   Details   DMCA
To those who are, willing to march into hell for a Heavenly Cause, here goes: Our Declaration of Independence, Gettysburg Address and U. S. Constitution are reduced to parchment hyperbole, the moment enough of us, see real change for the better in a reality show then in reality, elect those who have lost all sense of moral necessity.

America's 1775-2020 chain is only as virtuous in revolution, Lincolnesque in reconstruction and as ethical as a repentant people honor past sacrifices to our equitable law-abiding ideals. However, following the example of current GOP's Trump/Pence/McConnell opprobrium weakens our link to any hope of Justice for All.

Perhaps, with boogeyman updates, the GOP/Trump/Pence, Make America Great Again puppeteers believe, the best way to an American Heartland is through its, the South Shall Rise Again underbelly .

Democrats too, have taken turns twisting truth in pugnacious political prejudice: fleeing Lincoln's 1863 Emancipation - transforming into Dixiecrats, they, Went South, helping to create , The Solid South, for Jim Crow. However, claiming Democrats created the KKK is as vile a lie as Trump's , good people on both sides Charlottesville assessment.

The Ku Klux Klan, like all parented by fear and hate, was birthed by, We the white People without reparations. Denying our current political infamy by defending the people who people it, we emulate wheeling rodents running in circles, fighting the last war and reliving the last election campaign to be the last guinea pig standing on the dung hemp of racism, sexism and moneyed power lust.

There is no perfection in politics, no Wall Street penance for perpetuating, thirty pieces of silverlegacy, nothing to be proud of in the pride of sanctimonious zealots so our Democratic Republic hangs in current imbalance, by a silkworm's hind parts.

Fear, especially when disguised as patriotism clothed in knockoffs of lambskin, baits false prophets with, the idle brain is the devil's playground - trouble is, we were marched into hell before Mnuchin stole our Harriet Tubman $20.00 bill:

Political PACs are solidifying political parties behind Red & Blue lines for profitable power. America, however, isn't as simple as, The Right is wrong and The Left weak. Nonetheless, we've forgotten Exceptionalism's Heavenly Cause remains, unraveling the conveniently obscured complex definition of greatness in the mindset of the people peopling popularity of all-inclusive prejudice.

Imagine what webs of deceit we could delete; indeed, what solutions we could conjure if not mesmerized by talking-heads hypnotized by con-artists dangling political puppets on Corporatism strings.

On this Father's Day, I bid you love, wisdom, happiness and this possible bit of comfort: one day, like earth and all life upon it, all supremacists supremely gutting voting rights; all citizens denying a woman's right to choose, while crushing citizenship attempts with the profanity of a bigoted Census question; all those blocking Congress from legally saving our election process from foreign intervention will, like Mitch McConnell, turn to dust unable to grope one thin FDR dime of their ill-gotten gain.

Our American Dream is meant to be shared, yet, not all of God's children are safe from being kidnapped by the Trump/Pence/ICE administration but passionately pursuing a life of excellence protects all children from the savages that rage against them, for, like music, peaceful assembly can also, soothe the savage breast.

On Father's Day, thirty years ago, I took my parents to see Field of Dreams. I hope all children of any age will seize this unifying family experience perhaps imagining a world where our multitude of worthy causes join in one all-inclusive lifelong ensemble.

Resonating harmoniously, we compose the highest possible human life: universal love wrapped in giving hearts, inside a Heavenly Cause - asking humankind to seek human kindness, by knocking at the door of human decency.

The torch has been passed to a new generation - run with them, or get out of the way.