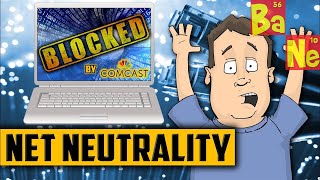 Why we need to save Net Neutrality
(Image by YouTube, Channel: Barnacules Nerdgasm)   Details   DMCA

The Moyers team has been in the fight for net neutrality from the very beginning. Our documentary Net at Risk was perhaps the first on television to alert the nation to the danger of a corporate takeover of the internet. When the mainstream media largely ignored the story, we gave advocates for net neutrality a national hearing. We followed former FCC commissioner Michael Copps and others to unofficial town meetings when the George W. Bush FCC refused to sanction such events. And we celebrated in the public interest when the Obama FCC voted in 2015 to protect and enforce net neutrality.

But every time we think the battle to protect the internet is won, the forces of greed, power and control come right back at us. After he and the Republicans won the 2016 election, Donald Trump appointed Ajit Pai, a former executive from Verizon, to head the FCC. Pai is leading the corporate crusade to overturn net neutrality, doing his best to give Verizon and the other telecommunications giants exactly what they want. It's classic regulatory capture, a government agency capitulating to the very industry it's supposed to oversee, the old fox in the henhouse switch that means death to the chickens.

The crucial FCC vote to reverse the net neutrality rules is Thursday, Dec. 14. There remains time to make your voice heard. Follow the instructions in this link to file comments. Or you can call 1-888-225-5322 or email Chairman Pai at Ajit.Pai@fcc.gov. Twitter: @FCC or @AjitPaiFCC. Facebook: Federal Communications Commission.

You can contact your congressional representatives -- right now, there's little chance that the current House and Senate would pass network neutrality legislation, but they do control the FCC's purse strings. Call your representatives at (202) 224-3121, or email them -- go to www.house.gov or www.senate.gov to track them down.

For more information on the current state of play, read the piece below by our senior writer, Michael Winship.

To understand why the internet's in big trouble again, first know this about how Washington works these days:

Donald Trump seems to irradiate and poison everyone who is sucked into his gravitational pull. There's a black hole in residence at 1600 Pennsylvania Ave.

Attorneys engaged in his defense twist themselves into questionable statements and behaviors as special counsel Robert Mueller's probe draws nearer. Members of Congress surrender their self-esteem and whatever shred of decency they may have left to put forward the plutocrats' agenda, while pandering to Trump's hardcore followers for fear of losing campaign donations or being primaried. Administration officials who are established enough to know better bow in obeisance or vigorously nod their heads in agreement with any dingbat thing the president says.

Mysteriously, some actually appear to enjoy the Kool-Aid; for all the buffoonery, Trump's cave-bear philosophy, such as it is, tends to favor the ideological and theocratic inclinations of people like Vice President Pence and EPA Administrator Scott Pruitt. Others are more manipulative and cynical, using this special moment in American history to hold their noses, take advantage and use the clown show as cover to advance the wish list that corporate America has been mailing to Santa for decades.

In that latter category, place the ambitious current chairman of the Federal Communications Commission, Ajit Pai. He was appointed a member of the FCC in 2011, and then named by Trump to take the chair earlier this year. Ever since, Pai has reshaped the commission as a pass-through for the telecommunications giants, giving them virtually everything they want. Acting more like the associate general counsel of Verizon that he once was and less like the government regulator he's supposed to be, Pai quickly began doing his utmost to wipe out whatever rules remain that keep open to citizens the lines of communication essential to a democracy.

Right now, his sights are aimed at net neutrality, the set of protections approved by the FCC in 2015 that keep the big internet service providers (ISPs) like Verizon, Comcast, AT&T and Charter from completely taking over and deciding who can see what on the web, how fast and for how much.

Related Topic(s): Ajit Pai Fcc Chair; FCC; Internet Censorship; Net Neutrality; Protest; Verizon, Add Tags
Add to My Group(s)
Go To Commenting
The views expressed herein are the sole responsibility of the author and do not necessarily reflect those of this website or its editors.