If media cross-ownership rules are eliminated, monopolies will dominate. 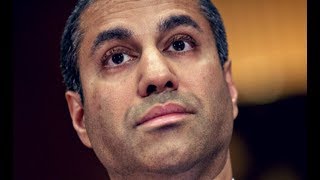 Nothing Donald Trump says to attack journalism is so dangerous as what Trump's chairman of the Federal Communications Commission, Ajit Pai, does to attack journalism. Pai has already used his position to threaten the quality and character of the democratic discourse on the Internet -- by seeking to undermine net neutrality -- and now he proposes to put a corporate stranglehold on the discourse in communities across the United States.

Since 1975, the FCC has banned media cross-ownership at the local level. What this means is that -- except in rare cases where waivers are issued -- one company cannot own a newspaper, a television station and radio stations in the same market. This rule was established to prevent the creation of "one newsroom" towns by media conglomerates that have for decades wanted to cut costs by buying up print and broadcast media outlets, combining their news operations and then dramatically reducing the number of local reporters, editors and on-air personalities. Related rules have maintained limits on the number of radio and television stations a media company could buy up and then dumb down -- by eliminating local programming and filling the airwaves with strictly formatted music and nationally-syndicated (and often rigidly right-wing) talk shows

On Wednesday, Pai announced that the FCC would vote as soon as November on a proposal to eliminate the cross-ownership rules and usher in a new era of media monopoly. For the better part of two decades, efforts to gut the rules have been blocked by grassroots groups representing consumers, journalists and democracy advocates. But Pai is moving quickly in hopes that he can avoid the sort of mass mobilization of citizens that -- with an assist from the federal courts -- derailed an effort by the Bush administration to overturn the cross-ownership rules.

As is common with Trump appointees who advance deregulation schemes that serve the interests of monopolistic corporations, Pai is employing Orwellian doublespeak in an attempt to fool Americans into thinking he wants to open up the media landscape. "We must stop the federal government from intervening in the news business," he told a House Commerce subcommittee oversight hearing on Wednesday.

Related Topic(s): Conglomerates; Corporate; Democracy; Deregulation-Regulation; FCC; Journalism; Trump Attacks Media, Add Tags
Add to My Group(s)
Go To Commenting
The views expressed herein are the sole responsibility of the author and do not necessarily reflect those of this website or its editors.