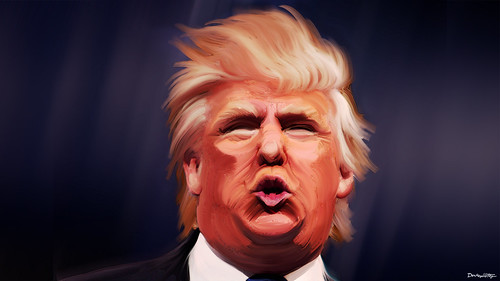 On Sunday morning Trump seemed to promote violence against CNN.

He tweeted an old video clip [below] of him performing in a WWE professional wrestling match, with a CNN logo superimposed on the head of his opponent.

In it, Trump is shown slamming the CNN avatar to the ground and pounding him with punches and elbows to the head. Trump added the hastags #FraudNewsCNN and #FNN, for "fraud news network."

The tweet culminated a bizarre week of Trump attacks on the media.

The night before, Trump used a portion of his speech at the "Celebrate Freedom" rally at the Kennedy Center to denounce the press. "The fake media is trying to silence us, but we will not let them. The people know the truth," he said. "The fake media tried to stop us from going to the White House, but I'm president and they're not."

On Thursday, Trump posted a crude tweet blasting the co-hosts of MSNBC's "Morning Joe," who have been critical of him -- calling Mika Brzezinski "low I.Q. Crazy Mika" and Joe Scarborough "Psycho Joe," and claiming that when they visited him New Years Eve, Brzezinski "was bleeding badly from a facelift."

On Wednesday, Trump charged that "The "#AmazonWashingtonPost, sometimes referred to as the guardian of Amazon not paying internet taxes (which they should) is FAKE NEWS!" It wasn't exactly clear what Trump meant by this, except to take a jab at Amazon founder and CEO Jeff Bezos, who purchased the Post in 2013. (Trump's blast seems to have been provoked by a Post story the previous day revealing that a TIME Magazine cover featuring Trump hangs in at least four of his golf clubs around the world, but the cover is a fake.)

Maybe Trump's attacks on the press were his way of distracting public attention from a week of embarrassing news -- the Congressional Budget Office's conclusion that the Senate's version of Trumpcare would cause 22 million Americans to lose their coverage, and the inability of Senate Republicans to pass it; the refusal of election officials in most states to cooperate with Trump's commission on voter fraud; and the news that Republican financier Peter W. Smith last fall assembled a team of computer experts to contact hackers connected with the Russian government, saying he was working with Trump campaign advisor Michael Flynn.

If Trump's goal was deflection, he did a fairly good job. His inflammatory tweets and statements took up a lot of newspaper space and airtime.

Or perhaps Trump is truly losing it. "President Trump is not well," Scarborough and Brzezinski concluded after the Trump tirade against them. Maybe the strain of being a thin-skinned narcissist under the continuous and critical glare of the press is finally tipping him over the edge.

But I fear an even more menacing reality.

Trump began his presidency attacking the press for "fake news." Then he called the networks and publications that criticized him "enemies of the people."

Related Topic(s): Donald Trump Lies; Media; Trump Insults; Video, Add Tags
Add to My Group(s)
Go To Commenting
The views expressed herein are the sole responsibility of the author and do not necessarily reflect those of this website or its editors.