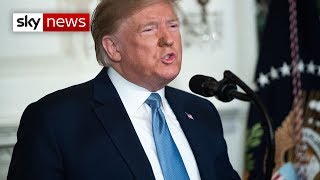 Within 13 hours, two mass shooting took place -- in El Paso, Texas and Dayton, Ohio -- killing 31 innocent people and injuring twice as many. We normally hear about these horrifying incidents, express sorrow and bewilderment, talk about gun control, and move on. Politicians, including Trump, dispatch their old and tired expressions of condolences and offer prayers to console the bereaved families of the victims. But then we go about our daily routine, knowing that the next mass shooting looms as if it were a natural phenomenon like a thunderstorm, in the face of which we can do nothing. And tragically, the vicious cycle continues.

This time, however, something far more sinister and profoundly troubling is at play. Race, guns, and immigration were so artfully combined by a racist president who is sworn not to pass meaningful gun control laws to please his base, promotes racism to divide the country, and calls Hispanic immigrants "invaders" to make them targets. During the past few months, Trump spent over a million dollars on Facebook ads with the word "invasion" in big letters to spread fear among his constituents and create an atmosphere ripe for violence against people of color.

In the first 216 days of this year, 251 mass shootings took place -- killing over 520 people and injuring at least 2,000. Is it just a coincidence that of the 10 worst mass shootings in American history, five took place since 2016? Can anyone suggest that Trump has nothing to do with it? Leave it of course to Trump to blame the press, mental illness, and even video games of being behind the frequency of mass shootings.

Darker and more ominous days await us. Mass shootings cannot be addressed in isolation but in the context of the general environment in which we are living. The country is politically divided, our values are being stomped on, racism is consuming our social fabric, white supremacists parade their bigotry with pride, and the president contributes to the epidemic of gun violence by spreading hate to promote his political agenda.

When a president makes racism and bigotry the order of the day, and Republican leaders condone it by virtue of their silence, it poisons our social and political organs and defies the very premise on which this country was founded.

The mass shooting in El Paso was explicitly motivated by hate, claiming there is a "Hispanic invasion of Texas." It was a hate crime targeting Hispanics, whom Trump sees as alien, rapists and criminals, taking away jobs, sapping public resources, and above all changing the color of the country. This is the message that Trump is conveying to his white supremacist followers, that America is becoming "browner" and something must be done to prevent that from happening, all while pointing the finger at Hispanic immigrants as the culprits.

True, mass shootings have occurred before and may continue for years after Trump leaves office. The degree to which mass shootings slow or escalate, however, depends not only on the passage of strict gun control laws but on the action or inaction from Trump and the Republican party, because they must bear the full responsibility for the sorry state of affairs in which we find ourselves. I do not hold my breath waiting for our racist-in-chief to do anything about it.

In fact, the precise opposite will happen. At a time of looming elections, Trump will continue to drum up his racism and dehumanizing of immigrants, and use toxic language against anybody who looks Hispanic. He believes that fomenting social division is a brilliant strategy to nurture his white supremacist base which listens to him and follows his preaching. The shooter in El Paso echoed precisely Trump's sentiment. And while Trump is talking about some gun control legislation, neither he nor his submissive Republican Senate will consider or debate any such laws that may alienate any segment of his followers.

While the Democratic candidates for president continue to bicker about healthcare, taxes, and climate change, however important these issues may be, they have not only ignored the need for gun control laws, but more important failed to address where the country is headed under Trump's watch. While they labeled Trump as a racist, they have not focused on the implications of his racist utterances and how devastatingly that impacts America's social cohesiveness and tolerance, which is the moral glue that keeps the country together.

The Republicans, on the other hand, seem to have totally abdicated their moral responsibility and resolved to enable Trump and use him to promote their socio-political and economic agenda. The fact that America's international standing is at an all-time low and domestic social disintegration is alarmingly unfolding does not seem to bother the Republicans, who put their personal and party interest above the nation's.

Just imagine what might happen if Trump loses the next election? Having polarized the country politically to the degree that he has, his poisonous rhetoric against people of color, concoction of a Hispanic invasion, alignment with white supremacists, and catering to his base has created an extraordinarily ominous environment that invites extremism and violence.

Although at this juncture enacting gun control laws remains critically important, they are not enough to remedy the damage that Trump has done to America. Under his watch, America has lost its soul. He has sown hatred, nurtured divisiveness, and pitted one segment of the American people against the other. Antisemitism has reached a new high, people of color are targets of disdain and discrimination, corruption and obstruction of justice is at the top, and alas, mass shootings are further escalating.

Trump will be damned by history for tearing the country apart, and as long as he is in power, we should expect that America's values and its moral standing will continue to degrade potentially to a point of no return.

Trump is dangerous, and the American public must unseat him to save America's soul before it's too late.

Related Topic(s): Hispanic; Immigrants; Racism; Shootings; Trump Against Democracy; Trump Idiot-in-chief; Trump Liar; Trump Tyrant; White Supremacy, Add Tags
Add to My Group(s)
Go To Commenting
The views expressed herein are the sole responsibility of the author and do not necessarily reflect those of this website or its editors.