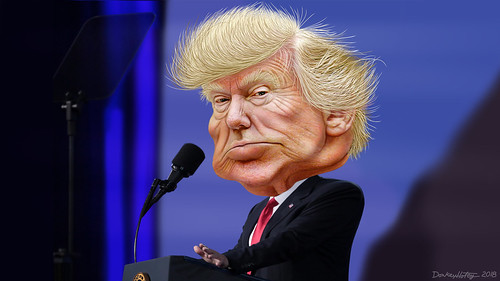 Trump's strategy for keeping power is to build up his coalition of America's white working class and the nation's ownership class.

It's a curious coalition, to say the least. But if Democrats don't respond to it, it could protect Trump from impeachment and even re-elect him. It just might create a permanent Republican majority around an axis of white resentment and great wealth.

Two decades ago, Democrats and Republicans competed over the middle class. They battled over soccer moms and suburban "swing" voters.

Since then the middle class has shrunk while the working class has grown, and vast wealth has been accumulated by a comparative few who now own a large portion of America. Some of their wealth has taken over American politics.

Counties whose voters shifted from Obama to Trump in 2016 had lost economic ground to the rest of America, even more than did solidly-Republican counties. Trump is counting on the unwavering support of these mostly white working class voters.

Meanwhile, much of the ownership class has come over to Trump. He's counting on it to bankroll Republican politicians who are loyal to him.

Since becoming president, Trump has sought to reward both sides of this coalition -- tossing boatloads of money to the ownership class, and red meat to the white working class.

One boatload is the corporate and individual tax cut, of which America's richest 1 percent will take home an estimated 82 percent by 2027, according to the Tax Policy Center.

Another boatload is coming from government itself, which Trump has filled with lobbyists who are letting large corporations do whatever they want -- using public lands, polluting, defrauding consumers and investors, even employing children -- in order to push profits even higher.

Trump's red meat for the white working class is initiatives and tirades against unauthorized immigrants and foreign traders -- as if they're responsible for the working class's lost ground -- and other symbolic gestures of economic populism, along with episodic racist outbursts, and support for guns and evangelicals.

Every time Trump sends more money to the wealthy he sends more red meat to his base.

Weeks ago, after announcing he'd seek another big tax cut before the midterm elections -- "phase two," as he termed it -- he threatened China with a trade war; arranged another crackdown on unauthorized immigrants, including a carefully-choreographed plan to break up families at the border and attack sanctuary cities; and vowed to go after pharmaceutical companies.

Yet, red meat goes only so far. At some point, you'd think, the white working class would realize that the only real beneficiaries of the Trump coalition are the super-rich.

Related Topic(s): Corporations; Democrats; Money; Trump Broken Promises; Trump Racist, Add Tags
Add to My Group(s)
Go To Commenting
The views expressed herein are the sole responsibility of the author and do not necessarily reflect those of this website or its editors.