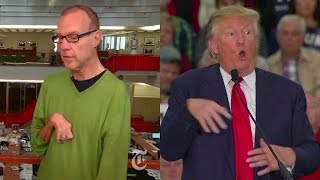 What word best describes Donald Trump? Almost two years ago, I wrote "The Main Problem with Donald Trump: He's a Fool." And I continue to think a fool he certainly is. But that word does not quite get to his essence. After the revelation in October 2016 of Trump's comments in 2005 about how he could "do anything" he wanted with women, including grabbing them "by the p*ssy," a more apt word should have occurred to me, but didn't. Now it does: crass.

The Merriam-Webster dictionary defines crass as 1) having or indicating such grossness of mind as precludes delicacy and discrimination, and 2) guided by or indicative of base or materialistic values. The Oxford Dictionaries indicate that it means "showing no intelligence or sensitivity." Dictionary.com adds, "without refinement, delicacy, or sensitivity; gross; obtuse; stupid."

Having identified crassness as Trump's trademark characteristic, we next turn to the historical question of what exists in the American character and culture that would make such a crass man appealing to enough Americans so that he ends up being our president.

Historian Richard Hofstadter's Anti-Intellectualism in American Life (1962) offers us some clues because Trump's crassness appeals to the anti-intellectual strain in American culture. In many ways Trump epitomizes this aspect. His global-warming denials and appointments of so many second-class minds like that of Energy secretary Rick Perry, who insists that "the science is still out" on climate change, are just two indications of Trump's attack on rationality. As conservative columnist David Brooks has written of Trump, "He has no ... capacity to learn. His vast narcissism makes him a closed fortress. He doesn't know what he doesn't know and he's uninterested in finding out."

It is not coincidental that Trump's popularity has been greatest among whites who are poorly educated, older, religiously evangelical, or from rural areas and small towns. Anti-intellectualism, as Hofstadter noted at some length regarding evangelicals, was more common among these groups than among most other religious believers and non-believers, younger voters, and big-city residents. And let's not forget Trump's backing by Fox News, whose two most prominent personalities were its founder Roger Ailes (who advised the Trump campaign) and Bill O'Reilly. Both men trafficked in anti-intellectualism and ultimately left Fox News amidst accusations of sexual harassment.

Whereas many Trump critics think him too crude, coarse, and vulgar, many of his admirers interpret his language as being down-to-earth and contemptuous of political correctness. To their minds he is a "straight shooter who speaks frank truths. He is the opposite of the intellectual or "egghead."

Hofstadter quoted one right-wing novelist as defining egghead as "a person of spurious intellectual pretensions, often a professor or the prote'ge of a professor. Fundamentally superficial. Over-emotional and feminine in reactions to any problem."

The historian acknowledged that many of America's Founding Fathers were intellectuals -- "sages, scientists, men of broad cultivation, many of them apt in classical learning, who used their wide reading in history, politics, and law to solve the exigent problems of their time" -- but the election of Andrew Jackson in the early nineteenth century signaled an important change. In his chapter "The Decline of the Gentleman," Hofstadter wrote that "the first truly powerful and widespread impulse to anti-intellectualism in American politics was, in fact, given by the Jacksonian movement." (Various sources have noted Trump's great admiration for Jackson, but also indicated it is based on a very limited understanding of Jackson's populist appeal.)

It was during Jackson's second presidential term that Alex de Tocqueville's first volume of his famed depiction of America (Democracy in America) appeared. As one book of the Frenchman's letters states, the "spirit of [American] self-interest appears crass to Tocqueville's aristocratic mind, and he suggests that Americans judge the value of anything only by asking, 'How much money will it bring in?'"

Following the Civil War, American crassness was satirized in The Gilded Age (1873), a novel co-written by Mark Twain and Charles Dudley Warner. It was a popular success, and some historians have applied the term to the whole period from the 1870s into the 1890s. Various historians have stated that it was "the crassness and materialism of the period," the "relentless tawdriness and vulgarity" that earned it the label. Similarly, as mentioned elsewhere, "Ersatz, kitsch, ostentatious, vulgar, poor taste" -- Trumpian could be a synonym for any of them.

At the end of the nineteenth century, one of America's best known writers was Henry James. Many of his novels and stories contrasted Americans and Europeans. Commenting on his stories collected in The Better Sort (1903), Ian Bell wrote, "they add up to a panorama of the vulgarity and commercialism of the age, in which innocence, sensitivity, and intelligence inevitably suffer, in which ... everyone and everything are sold... These stories are full of sensitive gentlemen and women who reluctantly serve, exist by serving, a crass civilization, who are themselves commodities or produce commodities." (James's brother, the philosopher William James, wrote of the U.S. "moral flabbiness born of the exclusive worship of the b*tch-goddess SUCCESS. That -- with the squalid cash interpretation put on the word success -- is our national disease.")

Related Topic(s): America; Anti-intellectualism; Crassness; Dishonesty; Politics; Trump Cruelty; Trump Ego; Trump Idiot-in-chief, Add Tags
Add to My Group(s)
Go To Commenting
The views expressed herein are the sole responsibility of the author and do not necessarily reflect those of this website or its editors.