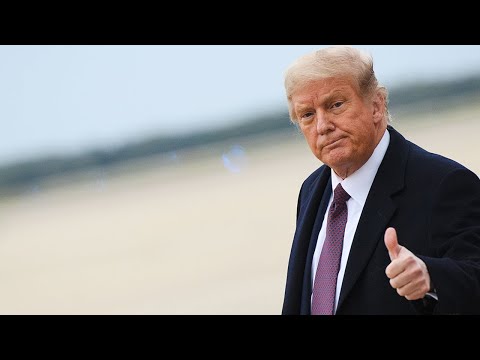 For about a minute today I found myself feeling sorry for Donald Trump. The poor man is now "battling" COVID-19 (the pugilistic verb is showing up all over the news). He's in the hospital. He's out-of-shape. He's 74-years old. His chief of staff calls his symptoms "very concerning."

Joe Biden is praying for him. Kamala Harris sends him heartfelt wishes. President Obama reminds us we're all in this together and we want to make sure everyone is healthy.

But hold on: Why should we feel empathy for one of the world's least empathetic people?

Out of respect. He's a human being. And he's our president.

Yet there's an asymmetry here. While the Biden campaign has taken down all negative television advertising, the Trump campaign's negative ads continue non-stop.

And at almost the same time that Biden, Harris, and Obama offered prayers and consoling words, the Trump campaign blasted "Lyin' Obama and Phony Kamala Harris" and charged that "Sleepy Joe isn't fit to be YOUR President."

Can you imagine if Biden had contracted Covid rather than Trump? Trump would be all over him. He'd attack Biden as weak, feeble, and old. He'd mock Biden's mask-wearing -- "See, masks don't work!" -- and lampoon his unwillingness to hold live rallies: "Guess he got Covid in his basement!"

How can we even be sure Trump has the disease? He's lied about everything else. Maybe he'll reappear in a day or two, refreshed and relaxed, saying "COVID is no big deal." He'll claim he took hydroxychloroquine, and it cured him. He'll boast that he won the "battle" with COVID because he's strong and powerful.

Meanwhile, his "battle" has distracted the nation from revelations that he's a tax cheat who paid only $750 in taxes his first year in office, and barely anything for 15 years before that; and that he's a failed businessman who's still losing money.

And from his vicious, cringeworthy debate performance last week, in which he didn't want to condemn white supremacists.

It even takes our mind off the major reason COVID is out of control in America: because Trump blew it.

He downplayed it, pushed responsibility onto governors, and then demanded they allow businesses to reopen -- too early -- in order to make the economy look good before the election.

He has muzzled and disputed experts at the CDC, promoted crank cures, held maskless campaign events, and encouraged followers not to wear masks. All of this has contributed to tens of thousands of unnecessary American deaths.

Trump's "battle" with COVID also diverts attention from his and Mitch McConnell's perversions of American democracy.

Related Topic(s): Corona Virus Coronavirus Covid-19; Democracy; Trump Dangerous; Trump Is A Thug; Trump Tax Returns; Trump The Fascist, Add Tags
Add to My Group(s)
Go To Commenting
The views expressed herein are the sole responsibility of the author and do not necessarily reflect those of this website or its editors.