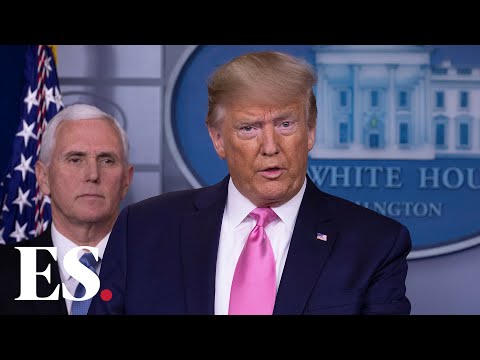 Donald Trump's coronavirus statement branded .incoherent.
(Image by YouTube, Channel: Evening Standard)   Details   DMCA
This week the stock market suffered its largest weekly loss since 2008, as cases of the novel coronavirus not explained by overseas travel or contact with a person known to be infected were reported in California, Oregon and Washington state. On Saturday, the first US death was reported.

A health crisis is rapidly morphing into an economic crisis and so far, the US response has left much to be desired.

Epidemiologists in other countries have used "surveillance testing" under World Health Organization guidelines to track the spread of the disease before large numbers of people turn up at hospitals. But according to a new report by ProPublica, the Centers for Disease Control and Prevention lost weeks that could have been used to track its possible spread in America because it insisted upon devising its own test, which turned out to be flawed.

Donald Trump and his administration would rather blame the media and the Democrats, and even question whether the virus is real.

On Friday, Trump accused news outlets like CNN of "doing everything they can to instill fear in people" while some Democrats are "trying to gain political favor by saying a lot of untruths." Acting White House chief-of-staff Mick Mulvaney, meanwhile, told conservative activists that journalists were hyping the coronavirus because "they think this will bring down the president; that's what this is all about."

At a campaign rally on Friday evening in South Carolina, Trump claimed concern about the virus was the Democrats' "new hoax," after the Russia investigation and then impeachment.

A few days before, Trump claimed that in sounding the alarm about the threat, House Speaker Nancy Pelosi was "not thinking about the country."

Trump's idea for how to deal with the potential crisis? He says he's considering another round of tax cuts.

As if cutting taxes would somehow motivate people fearful of contagion to venture into shopping malls, movie theaters and jet airplanes. As if pumping up the stock market is the most important first step to dealing with a public health emergency. As if Trump's earlier round of massive tax cuts trickled down to average Americans.

Trump is also instructing all government health officials and scientists who have information about the virus to first clear their statements with the White House. Controlling the flow of information within an administration that is not especially renowned for truth-telling doesn't seem calculated to increase the public's confidence in what they hear.

Trump has taken several other steps, all of them backward. He has eliminated a National Security Council position that coordinates responses to pandemics. He has ignored an expert panel's warning that the US is badly unprepared for global health threats and needs to restore funding to address them, and is requesting that the CDC budget be cut by almost 16%, starting in October, and the Department of Health and Human Services budget by almost 10%.

When he's not accusing his enemies of hyping the coronavirus or doing what he can to undermine the nation's and world's ability to cope with it, Trump and his administration have been making America more vulnerable to all sorts of health risks.

He's demanding that anyone receiving public assistance have a job, which presumably will make many people reluctant to stop working if they feel sick.

Related Topic(s): Corona Virus Coronavirus Covid-19; Danger; Threats; Trump Attacks Media; Trump Cruelty, Add Tags
Add to My Group(s)
Go To Commenting
The views expressed herein are the sole responsibility of the author and do not necessarily reflect those of this website or its editors.