Once again more Americans are being excluded from the bargain than added to it: democracy is taking on the airs of a gated community. 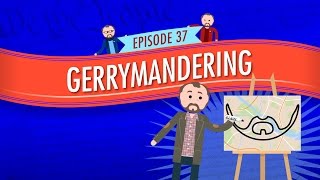 The Declaration of Independence's idea of all men being created equal was almost accurate in so far as the wording is concerned: if you were a man, if you owned property and if you were white, you were pretty much set. The overwhelming majority of Americans were excluded from the bargain, among them women, who represented more than half the population, slaves, Native Americans, the poor, the weirdly colored, the irreligious, the young. As white supremacy goes, you could hardly have found better advocates than the Founders.

Over time we've gotten much closer to the ideals of the Declaration. The Bill of Rights became more inclusive. "Diversity" busted out from aspiration to reality. But the pendulum has been swinging back. Once again more Americans are being excluded from the bargain than added to it: democracy is taking on the airs of a gated community.

It's been systematic. Voting districts have become a parody of fairness. They're drawn not to represent the people in them but to maximize the electoral benefit to the party in power. That's how you end up with just a 1 percent difference in actual votes cast between parties for House of Representative elections in the 2016 election, but a 5 percent advantage for Republicans in actual number of seats.

That 1 percent difference would not exist but for the draconian voting rules in about half the states, which make it more difficult for the young, the poor and minorities to vote, again suppressing the traditionally Democratic vote. The hysteria over voting fraud that's led to all these rules is based on made-up fears. There is no fraud. The statistically risible exception aside, there are no undocumented immigrants voting, no citizens voting twice or dead citizens voting thrice, even in West Virginia. But voting rules such as strict ID requirements have themselves become the fraud, a form of poll tax masked by other means. If those rules were not in place, we'd have a very different make-up in the House of Representatives today and in state houses across the country.

Now the Trump Administration has come up with a new way to further gerrymander voting districts in Republicans' favors. For the first time in 70 years, the Census Bureau will follow the Justice Department's order and ask respondents whether they are U.S. citizens or not. There is zero reason to do so, because the question is already asked on the Census Bureau's annual community survey, and because the reason the Trump administration is giving for asking it, that it would allow for better enumeration of minorities and compliance with the Voting Rights Act, is laughable. This is not an administration concerned with minorities or voting rights.

But it is an administration concerned with reducing immigrants' rights starting with reducing immigration outright. If you doubt that, just have a look at the featured image under the "Immigration" tab at the White House. No Emma Lazarus imagery of huddled masses here, no Statue of Liberty beacon, no smiling faces of the sort of immigrants -- which is to say, most immigrants -- who've been disproportionately powering this country's economy since the 1990s. No, the only smiling face is that of a beefed up Border Patrol agent surrounded by his paramilitary posse in the sort of posture ready for assaults. This is not an image about immigration or immigrants, but about putting the cuffs and knuckles on either. Of course the Census form is going to ask you whether you're a citizen. E pluribus unum is giving way to your papers please.

The reason Trump & Co. want the question asked is to intimidate immigrants who are fearful enough as it is of answering questions by a government interrogation, and to suppress the number of immigrants who will take part in the census. That in turn will diminish the number of immigrants counted and certain populations overall, and the Medicaid, food stamps and school aid dollars those populations will receive. Come redistricting time fewer minorities or immigrants will have been counted, and just like that, the country's diminishing white majority will have been given an artificial booster shot that translates into whiter, and need it be said, more Republican, districts. Keep in mind that the Census is not about counting Americans, but counting all people living in the United States, documented or not. That's what the Constitution requires.

All questions added to the Census take extensive testing first to determine validity or usefulness. The bureau, for instance, just decided that it would not add an ethnic category of "Middle Eastern/North African" because more testing is needed. (I have my doubts: the proposal has been tested, and to make people like me, of Arab descent, have to notch up the box that says "white," if we have to notch a box at all -- itself a problematic issue -- is no weirder than making blacks or Hispanics do so. But I can also understand that the nation is not too eager or ready to concede that there may be 4 million of more Arabs lurking about in these parts.)

The one about citizenship was never tested. What's taking place in effect is the most systematic attempt in the nation's history at gerrymandering what's left of our democracy. It is a lurch back to the earlier days of the whites-only Declaration, and it is pure Trump.

At least 12 states are prepared to sue the administration over the fraud as of this week, with more certain to join. Naturally, Florida is not among them. One-party states where minorities and the poor count only as three-fifth of human beings generally aren't. But let's not pretend that this has anything to do with counting right. It has to do with counting white.

Related Topic(s): Census; Elections; Gerrymandering; Undocumented, Add Tags
Add to My Group(s)
Go To Commenting
The views expressed herein are the sole responsibility of the author and do not necessarily reflect those of this website or its editors.