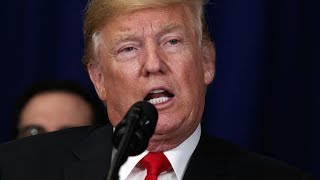 CAREER CRIMINAL DONALD TRUMP just barely avoided prosecution earlier this year when special counsel Robert Mueller pulled his punches and refused to indict the president for either obstruction of justice or campaign finance violations in connection with the Trump-Russia investigation. Mueller's decision not to indict Trump came despite overwhelming evidence in Mueller's own final report that the president of the United States was guilty of a crime.

Most people who survive that kind of legal threat would lie low, at least for a while, and try to get back to some level of normalcy. But Trump is a habitual criminal, and his reaction to escaping Mueller's investigation was to go on yet another crime spree.

In fact, Trump has been acting like a bank robber who beat one rap because of a technicality, and so decides to rob every bank in sight.

In the Trump-Russia inquiry, Mueller was able to prove that the Russian government intervened in the 2016 election to help Trump win. But he never could prove, at least to his own satisfaction, that Trump or the people around him had colluded with Moscow in its election interference. Mueller did show that Trump campaign officials met with Russians in an effort to gather dirt on Democratic presidential candidate Hillary Clinton, and that Trump was guilty of obstruction of justice in trying to make the whole Russian case go away.

But Mueller decided that he couldn't prove that, by asking for opposition research from foreigners, the Trump campaign had violated the campaign finance law that bans accepting things of value from foreigners.

Mueller also built a conclusive case that Trump was guilty of obstruction of justice, based on a series of actions seeking to derail the Russia investigation. But Mueller decided that, since the Justice Department has a long-standing legal opinion arguing that a sitting president can't be indicted, he wouldn't charge Trump with obstruction.

In the end, Mueller didn't indict Trump for anything, and Congress decided not to try to impeach Trump in connection with the Russia probe. On July 24, Mueller testified before Congress about his investigation and final report. After his testimony, the special counsel quietly exited the scene, having let Trump off the hook.

The president was a free man.

SO WHAT DID TRUMP do with his newfound freedom?

The very next day on July 25 he was at it again, this time with Ukraine.

Trump got on the phone that day with the new president of Ukraine, Volodymyr Zelensky, and repeatedly sought his help in an attempt to damage Trump's political rival, Democratic presidential candidate Joe Biden. This time, there was no question, as there had been in the Russia case, about whether Trump directly sought the help of a foreign power to help him win an election. A summary of the call released by the White House on Wednesday proves Trump did exactly that.

The summary is based on notes taken by White House staffers who were listening in on the telephone conversation between Zelensky and Trump. The notes are not an exact transcript, and may soften or omit the most egregious statements by Trump.

Related Topic(s): Crime; Election; Mueller Investigation; Trump Against Democracy; Trump Claims Innocence; Trump Impeachment; Whistleblower, Add Tags
Add to My Group(s)
Go To Commenting
The views expressed herein are the sole responsibility of the author and do not necessarily reflect those of this website or its editors.