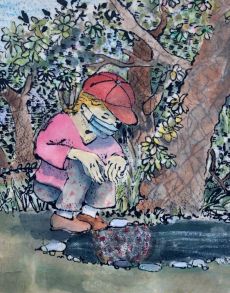 Damn Just Look at My Reflection
(Image by Akemi Ohira)   Details   DMCA
In this age of real and imaginary extremes, conspiracies and lockstep mindsets, where too many have become self-hypnotically vulnerable to potential electoral crucifixion, so nailed by our self-decapitating federal government: no time for sneers, smirks nor unmasking for, I told you so.

Long before Tim Russert unintentionally parted The Red Sea of America's Red and Blue states, exposing the myth of our, united we stand, what impressed me most about Charlton Heston's pre-NRA Moses response to a leader who thought himself a god, was: an imperious leader can easily drown his loyal followers in their belief in false prophets, and destroy a nation and civilization far senior to America.

Our 244-year venture has been compromised by the malignancy of Too Big to Fail latching onto America's Marshall Plan and ACA cells, by humans ignoring, To whom much is given, much is required, who washed their hands of justice and equality for all, long ago, savoring their abandonment of planetary stewardship.

Nonetheless, from its inception, America's democratic ideals were the golden calf for millions. Through feast and famine, Civil and world wars, assassinations and deceptions, Depressions and Recessions, our international standing was, the good: one person one vote, the bad: our over-consumerism at the expense of the less fortunate, until the ugly American: an unapologetic, inept and apathetic fake, was lifted up from the glitter of fool's gold by the chess masters of greed for power and dominion over earth and all life upon it.

What if our 2020 elections are a revelation precipice, allowing us to look into the promised potential of either America's self-destruction or self-renewal? Will we see the hardened heart of Ramses II or a new Moses?

Will we vote to be remembered for our majestic monuments to slave owners, catatonic enslavement to Black Friday purchased devices or for our artistic humanity and indiscriminate human kindness?

For months America's president kept the tragic potential of COVID-19 secret from, Proud Boys and Never Trumpers, Republicans and Independents, Democrats and Undecided - from those who worship the ground he walks upon and those who wish he were six feet under it.

Why? So, he can stay out of jail, saved by bone spurs, pretending ill-gotten gain would make him in the image of Khizr Kahn's heroic son, patriots like Senator John McCain or veterans Hunter and Beau Biden?

If so, is there enough retrievable, Ask what you can do for your country, to elect civility, unity and the sanity needed to save our Constitution from the realization of a founding fear: a tyrant could manipulate public opinion and come to power on the shoulders of misinformation and emotional mob rule?

Although armed with more information than he cared to share, Trump risked the lives of his Base by holding large indoor, and outdoor, events with supporters who, at his bidding, attended without masks or following social distancing guidelines.

Now it seems, his undercutting scientific expertise and retarded response to providing PPE(s) to hospital personnel is having its way with him.

Be assured I do not wish Donald Trump dead, for any reason, including, but not limited to: Mike Pence actually believes that his religious beliefs make him superior to people who don't think, look or act as he does.

Tragically however, even in the throes of possible death, Trump enablers fear sharing truth: a White House source tells reporters, the president's vitals over last twenty-hours were very concerning, and the next forty-eight hours will be critical - we're still not on a clear path to full recovery, while Walter Reed military Medical spokespersons claim, the president has been fever free for over twenty-four hours, we remain cautiously optimistic, but he's doing great.

Clearly, it is difficult to trust what we're told about, or by Donald Trump, as most often, it fails to survive fact checking, especially when our 45th has intentionally endangered American Security with national instability, repeatedly.

What is American truth: