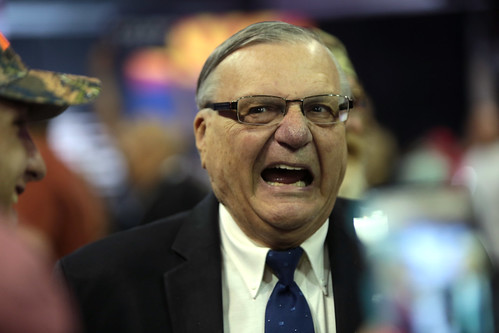 On Friday, less than two weeks after refusing to unequivocally condemn the white supremacists and neo-Nazis in Charlottesville, Donald Trump granted former Arizona Sheriff Joseph Arpaio a rare presidential pardon, calling the notorious racist an "American patriot." The pardon is noteworthy for many reasons.

First, it demonstrates Trump's utter disdain for the rule of law. US District Judge Susan Bolton convicted Arpaio of criminal contempt for showing "flagrant disregard" of a 2011 court order that he cease racial profiling. Nevertheless, for 18 months, Arpaio, who called himself "America's toughest sheriff," continued his racist practice of detaining Latinos without reasonable suspicion. "The fact that Arpaio is quite literally convicted of being in criminal contemptof the courts is a big selling point for a president who has evinced nothing but contempt for the judicial branch since before he took office," Dahlia Lithwick wrote at Salon.

Second, the pardon sends a clear message to Paul Manafort, Michael Flynn and anyone else whom special counsel Robert Mueller subpoenas to testify in his Russia investigation. Trump could pardon them, too, if they refuse to cooperate and are held in contempt of court. No need to make a deal and testify against the president or his family members in order to receive lenient treatment.

Third, the pardon telegraphs to Trump's right-wing base that he's still pursuing their racist, anti-immigrant agenda even though presidential advisers Steve Bannon and Sebastian Gorka, both widely associated with white nationalism, have left the White House. "The white supremacists, Neo-Nazis and others the president excused heard his endorsement of racist and illegal policing loud and clear yet again," Vanita Gupta, president and CEO of the Leadership Conference on Civil and Human Rights, stated.

Perhaps most significant is what the pardon says about the president. It demonstrates beyond doubt that Trump and Arpaio share the same values. Both men are racist to the core. Neither has any respect for the law. And both retaliate against those who criticize their actions. Like Trump, Arpaio attacked judges who ruled against him.

Both Trump and Arpaio championed the "birther movement."

The editorial board of the Arizona Republic wrote, "By pardoning Arpaio, Trump made it clear that institutional racism is not just OK with him. It is a goal." The pardon "elevates Arpaio once again to the pantheon of those who see institutional racism as something that made America great."

"Pattern or Practice of Unconstitutional Policing"

After a comprehensive investigation, the Justice Department's Civil Rights Division concluded in a 2011 report that Arpaio's Sheriff's Department in Maricopa County, Arizona, engaged in a "pattern or practice of unconstitutional policing." The 22-page report documented the use of excessive force, routine punishment for detainees who didn't speak English, a "wall of distrust" between officers and Latino residents, and "a chronic culture of disregard for basic legal and constitutional obligations."

The report came to the following conclusions:

Related Topic(s): Arpaio; Latinos; Pardon; Sheriff; White Supremacy, Add Tags
Add to My Group(s)
Go To Commenting
The views expressed herein are the sole responsibility of the author and do not necessarily reflect those of this website or its editors.