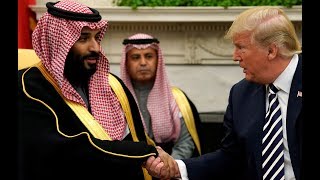 DONALD TRUMP ON TUESDAY issued a statement proclaiming that, notwithstanding the anger toward the Saudi Crown Prince over the gruesome murder of journalist Jamal Khashoggi, "the United States intends to remain a steadfast partner of Saudi Arabia to ensure the interests of our country, Israel and all other partners in the region." To justify his decision, Trump cited the fact that "Saudi Arabia is the largest oil producing nation in the world" and claimed that "of the $450 billion [the Saudis plan to spend with U.S. companies], $110 billion will be spent on the purchase of military equipment from Boeing, Lockheed Martin, Raytheon and many other great U.S. defense contractors."

This statement instantly and predictably produced pompous denunciations pretending that Trump's posture was a deviation from, a grievous violation of, long-standing U.S. values and foreign policy rather than what it actually and obviously is: a perfect example -- perhaps stated a little more bluntly and candidly than usual -- of how the U.S. has conducted itself in the world since at least the end of World War II.

The reaction was so intense because the fairy tale about the U.S. standing up for freedom and human rights in the world is one of the most pervasive and powerful prongs of western propaganda, the one relied upon by U.S. political and media elites to convince not just the U.S. population but also themselves of their own righteousness, even as they spend decades lavishing the world's worst tyrants and despots with weapons, money, intelligence and diplomatic protection to carry out atrocities of historic proportions.

After all, if you have worked in high-level foreign policy positions in Washington, or at the think thanks and academic institutions that support those policies, or in the corporate media outlets that venerate those who rise to the top of those precincts (and which increasingly hire those security state officials as news analysts), how do you justify to yourself that you're still a good person even though you arm, prop up, empower and enable the world's worst monsters, genocides, and tyrannies?

Related Topic(s): Foreign Affairs; Foreign Money; Media; Oil; Saudi Arabia Ben Salmon; Trump And Saudi Arabia, Add Tags
Add to My Group(s)
Go To Commenting
The views expressed herein are the sole responsibility of the author and do not necessarily reflect those of this website or its editors.