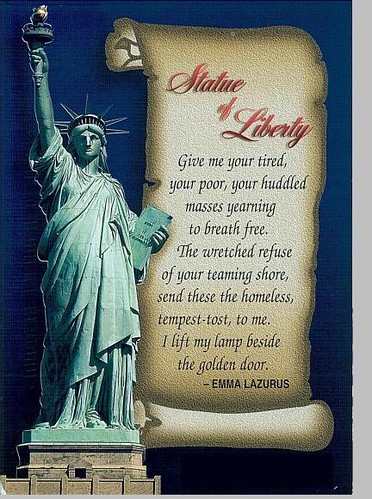 Trump to global CEOs and financiers in Davos, Switzerland: "America is open for business." We're now a great place for you to make money. We've slashed taxes and regulations so you can make a bundle here.

Trump to ambitious young immigrants around the world, including those brought here as children: America is closed. We don't want you. Forget that poem affixed to the Statue of Liberty about bringing us your poor yearning to breathe free. Don't even try.

Well, I have news for the so-called businessman. America was built by ambitious people from all over the world, not by global capital.

Global capital wants just one thing: A high return on its investment.

Global capital has no obligation to any country or community. If there's another place around the world where taxes are lower and regulations laxer, global capital will move there at the speed of an electronic blip.

Global capital doesn't care how it gets a high return. If it can get it by slashing wages, outsourcing to contract workers, polluting air and water, defrauding investors, or destroying communities, it will.

People are different. Once they've rooted somewhere, they generally stay put. They develop webs of connections and loyalties.

If they're ambitious -- and, let's face it, the one characteristic that almost all immigrants to America have shared for more than two centuries is ambition -- they develop skills, educate their kids, and contribute to their communities and their nation.

My great grandfather arrived in America from Ukraine. He was 19 years old and penniless. What brought him here was his ambition. He built a business. He started a family.

Then he invited his brothers and sisters from Ukraine to join him. He put them up in his home and gave them some of his savings to start their own lives as Americans.

You may call it "chain migration," Mr. Trump, but we used to call it "family reunification." We believed it wasn't just humane to allow members from abroad to join their loved ones here, but also good for the America. It made the nation stronger and more prosperous.

By the way, Mr. Trump, global capital doesn't create jobs. Jobs are created when customers want more goods and services. Nobody invests in a business unless they expect consumers to buy what that business will produce. Those consumers include immigrants.

Consumers are also workers. The more productive they are and the better they're paid, the more goods and services they buy -- creating a virtuous circle of higher wages and more jobs.

Related Topic(s): Capitalism Over Humanity; Family; Global Capitalism; People Power; Trump Hypocrisy, Add Tags
Add to My Group(s)
Go To Commenting
The views expressed herein are the sole responsibility of the author and do not necessarily reflect those of this website or its editors.