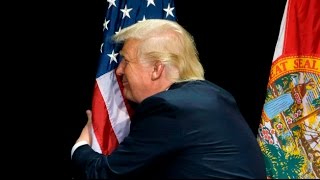 Last week, with great fanfare, Donald Trump rolled out his new National Security Strategy (NSS). Its guiding theme is "America First." An analysis of the 55-page document, however, reveals a program that renders the United States more unpopular and vulnerable to external threats.

Trump's plan takes Barack Obama's policy of "American exceptionalism" to a new level. In his speech accompanying the NSS's release, Trump stated, "America has been among the greatest forces for peace and justice in the history of the world."

Yet Trump has not only continued but also escalated the Bush-Obama wars in Afghanistan and Iraq, dropped Tomahawk missiles on Syria, threatened North Korea and Iran, intensified airstrikes against Muslim countries, and fanned the flames of conflict in the Middle East.

Trump's NSS stresses military might but makes scant reference to diplomacy. His administration is building 10 new aircraft carriers worth $13 billion each as a counterweight to China, and expanding the US nuclear weapons program to the tune of $1 trillion over the next 30 years.

Nuclear weapons are "the foundation of our strategy to preserve peace and stability by deterring aggression against the United States, our allies, and our partners," according to the NSS. But Trump has dangerously escalated tensions with North Korea, providing that country with increasing incentives to develop nuclear weapons that reach around the world.

And by refusing to recertify Iran's compliance with the nuclear agreement, in spite of the UN International Atomic Energy Agency's finding to the contrary, Trump is further imperiling peace.

The NSS's brief mention of working with international organizations is belied by the Trump administration's abiding contempt for the United Nations. The UN Charter was created in 1945 by the countries of the world to collectively restore and maintain international peace and security.

As with Trump's domestic program, the NSS makes no pretense of concern for human rights in other countries. This is evidenced in practice by Trump's unwavering support for Israel's brutal occupation of Palestinian lands, including, most recently, his declaration that Jerusalem is the capital of Israel. The NSS accurately states, "for generations the conflict between Israel and the Palestinians has been understood as the prime irritant preventing peace and prosperity in the region."

But the NSS minimizes Israel's central responsibility for the conflict, stating, "The threats from radical jihadist terrorist organizations and the threat from Iran are creating the realization that Israel is not the cause of the region's problems."

In defiance of nearly all other nations, Trump's Jerusalem declaration endangers world peace. Indeed, last week, the UN Security Council voted 14-1, with a US veto, to condemn Trump's characterization of Jerusalem as the capital of Israel. And in a rarely used procedure called Uniting for Peace (UFP), the UN General Assembly overwhelmingly followed suit. UFP allows the General Assembly to take measures to restore international peace and security when the Security Council is unable or unwilling to act. By utilizing UFP, which requires a two-thirds vote, this resolution has greater force than other General Assembly decisions. The International Court of Justice upheld the legality of UFP in its 1962 advisory opinion.

Richard Falk, former UN Special Rapporteur for Palestinian Human Rights, told Truthout that, "What is already evident on the basis of [Trump's Jerusalem] decision itself is the severe damage done to the global and regional leadership reputation of the United States."

While setting forth the goal of being an "energy-dominant nation," the NSS gives short shrift to "the importance of environmental stewardship." Obama's 2015 NSS, on the other hand, correctly stated that climate change was an "urgent and growing threat to our national security." Yet Trump's NSS does not recognize the threat of climate change. And in spite of increasingly extreme and unseasonal weather events such as recent hurricanes and wildfires, Trump has alarmingly and irresponsibly pulled out of the Paris climate accord.

The four pillars of the NSS, according to Trump, are protecting the US homeland, promoting US prosperity, achieving peace through strength and advancing US influence in the world.

Pillar I: Protect the Homeland

Related Topic(s): American Facism; Immigration; Inequality; National Security Strategy; Poverty; Suffering; Trump Hypocrisy, Add Tags
Add to My Group(s)
Go To Commenting
The views expressed herein are the sole responsibility of the author and do not necessarily reflect those of this website or its editors.