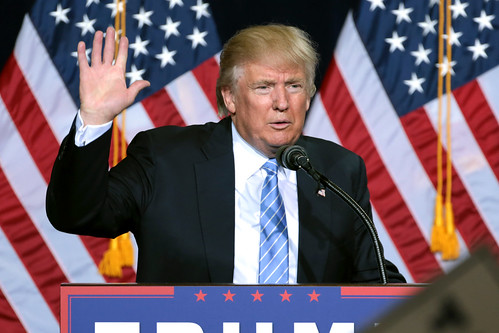 In the 2018 midterm elections Democrats have a strong chance of regaining control of the House of Representatives, and performing significantly better than expected in Senate elections, because Republicans are cursed by tying their fate to the historically unpopular President Donald Trump.

The best way to describe American politics in 2017 is that there is an anti-Trump wave gathering steam across the nation, with his disapproval ratings in a recent Gallup poll reaching 60 percent. The GOP curse is the Democrat's blessing. Vehement opposition to Trump will powerfully drive voter turnout in 2018.

The best way to describe international politics in 2017 is that there is a wave of disapproval of Trump and far-right extremism throughout the democratic world. Austria roundly rejected the far right in its latest presidential election. Then the Netherlands rejected far-right extremism. Then French voters rejected the far-right candidate for president, Marine Le Pen, who was publicly touted by Trump before she was crushed by the landslide victory of Emmanuel Macron.

In Britain, conservative Prime Minister Theresa May was humiliated in a snap election after she moved to the right by aggressively championing Brexit and appealing to voters of the far-right UKIP party.

Shakespeare wrote there is a tide in the affairs of men which taken at the flood leads on to fortune. The tide of the right, the far right and the alt-right has ended and reversed across America and throughout the democratic world. The dark cloud over the Trump presidency appears poised to engulf the Republican Party in the 2018 elections.

GOP members of the House of Representatives will be tarred and tainted by the radical, extreme and cruel RyanCare bill that was drafted in secret and rammed through the House. Even Trump, who lavished praise on the RyanCare bill when it passed the House, now describes it as "mean," leaving House Republicans out on a politically disastrous limb.

For those who have not figured out that the Tea Party movement has more in common with King George III than the American patriots in 1776, consider the shameless giveaway to big banks stealthily passed on a party-line vote in the Republican House while Americans were watching former FBI Director James Comey call Trump a liar, during an investigation of a Russian dictator's cyber war attack seeking to elect a Republican president.

Countless Republican candidates in 2018 will be tainted and tarred by a greed-inspired banking bill that ends many financial protections for Americans that were created after the last financial crisis, which was largely caused by policies of the previous Republican president and his GOP allies in Congress.

The mathematics of the Trump curse for Republicans are simple. Trump threatens them with losing support from his base in GOP primaries, which pressures them to support positions that are anathema to the strong majority of Americans who deplore the Trump presidency and are hyper-motivated to vote against Republicans in general elections.

Ronald Reagan would be outraged by cyber war from Russia designed to attack our democracy, but some Republicans, in some cases fairly, will be attacked for supporting a coverup of the Russian crime against America to protect Trump, the beneficiary of the Russian crime.

I will have more to say about the Georgia special election soon. For now, if Democrat Jon Ossoff is elected to fill the vacant House seat, there will be panic throughout the GOP. In the last four elections, that seat has been won by Republicans with margins of 23, 32, 29 and 99 percent.

Related Topic(s): 2018 Elections; Republican; Trump Idiot-in-chief, Add Tags
Add to My Group(s)
Go To Commenting
The views expressed herein are the sole responsibility of the author and do not necessarily reflect those of this website or its editors.