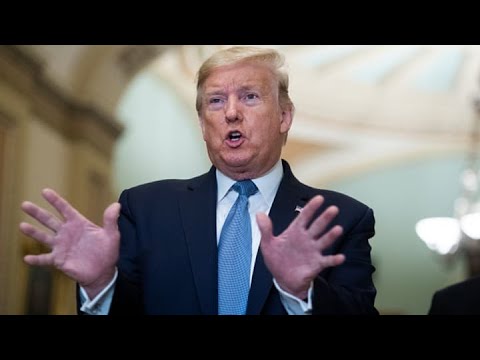 At a press conference Saturday, President Trump announced that he had been tested for the coronavirus, settling for the time being a question on which the White House has reversed itself three times in less than two days.

Only about 12 hours earlier, the White House physician released a letter saying testing wasn't necessary for the president and would not be done, while acknowledging that another person Trump hosted at Mar-a-Lago last weekend has now tested positive for the virus.

Trump did not explain why he changed his mind. Results of the coronavirus test typically take around two days.

On Friday afternoon, Trump had told reporters at a White House press conference that he would "most likely" be tested. The president was photographed at his Mar-a-Lago resort in Florida last Saturday standing shoulder to shoulder with a spokesman for the Brazilian government, who tested positive for coronavirus on Thursday.

"I didn't say I'm not going to be tested," Trump said after one reporter asked him if he was being "selfish" by not getting tested and continuing to interact with members of his administration, including officials in charge of controlling the pandemic. Defying public health precautions, he spoke to a large group of reporters in the Rose Garden and shook hands with numerous staffers who joined him on the podium.

"Shaking hands is not a great thing to be doing now, I agree," Trump said Saturday, but he said it was a hard habit to break.

Dr. Anthony Fauci, a key figure in the response to COVID-19, spoke to the press from the lectern, repeatedly using his hand to adjust the height of the microphone into which the president, who is at least six inches taller, had just been speaking.

Trump's statement represented a reversal of the White House's position from a day earlier, when press secretary Stephanie Grisham said there was no need for Trump or Vice President Mike Pence to be tested. "Both the president and vice president had almost no interactions with the individual who tested positive and do not require being tested at this time," Grisham said.

Then, just before midnight on Friday night, the White House reversed itself again, releasing a letter from Sean Conley, the president's physician, which said that "testing for COVID-19 is not currently indicated" for Trump.

At the same time, the letter disclosed that in addition to the Brazilian government spokesman, they had learned of "another dinner guest, this one sharing the table with the President and White House delegation, who was symptom-free until [Friday] morning and has since tested positive for COVID-19."

Miami Mayor Francis Suarez, who was at Mar-a-Lago on Saturday and attended some of the events involving the Brazilian delegation, announced Friday morning that he had tested positive for COVID-19.

Trump has also been in contact with members of Congress who went into self-quarantine after being exposed to individuals who later tested positive.

Staff at Mar-a-Lago sent a note to members saying that they were "washing the place down a couple times a day."

Related Topic(s): Corona Virus Coronavirus Covid-19; Corona Virus Coronavirus Covid-19; Mar-a-lago; Trump Claims Innocence; Trump Dangerous; Trump Hypocrisy; Trump Liar, Add Tags
Add to My Group(s)
Go To Commenting
The views expressed herein are the sole responsibility of the author and do not necessarily reflect those of this website or its editors.

Trump, reversing position, says he got tested for coronavirus after all