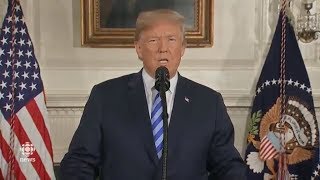 A few minutes ago President Trump, in all his infinite wisdom-not-pulled the US out of the P5&1 multinational nuclear deal with Iran.

Not that this was unexpected. He's been threatening to do it even before he was elected.

Now there's no sense in listing all the reasons he gave for reneging on the deal because they're all bogus. And why is that so?

Because the IAEA nuclear inspectors as an integral part of the agreement-the most stringent inspections ever placed on any nation-have certified multiple times since the deal was agreed to in 2015 Iran has been in full compliance with ALL terms of the agreement. Every complaint Trump spoke of falls outside the parameters of the deal the US agreed to.

French President Emanuel Macron visiting the White House a couple of weeks ago tried to persuade the "Donald" to keep the US from reneging. German Chancellor Angela Merkel did the same. Even British Foreign Secretary Boris Johnson tried as well. All to no avail. Of course Russia and China fully support the deal with Iran.

All the other signees to the deal with Iran particularly in Europe see it as an economic benefit to all concerned. With sanctions lifted on Iran European companies see trade as a boon to them and the economy of their countries. Not that the US was making things easier for European companies to have contracts with Iranian interests. The US has threatened European companies with sanctions if they pursued trade with Iran though some trade normalization has begun. Now with Trump reneging on the deal he is going to reinstate all the sanctions previously waived on Iran and impose new sanctions.

Of course it's still possible all the other signees to the Iran deal could continue normal economic and trade relations with Iran. For the Europeans it would be to their economic detriment if they knuckle under US pressure and deal harshly with Iran.

As for Iran it has said under no circumstances will it renegotiate a new deal. They are in full compliance. It is the US that is the obstacle and the rest of the world knows it.

Only Israel and Saudi Arabia, both obsessive in their hatred of Iran wanted Trump to scuttle the nuclear deal.

Interestingly Israeli Prime Minister Benjamin Netanyahu is to meet with Russian President Vladimir Putin in Moscow tomorrow. We'll have to wait and see the outcome of that meeting. Now is Bibi there to give assurances to Putin no Russian military personnel will come under fire in Syria? Just the Iranians and Hezbollah. But with Russia a close military ally of Iran and Hezbollah in Syria, all legally there at the request of Syrian President Bashar Assad, it's hard to imagine Putin giving a pass to Netanyahu's IDF- Israeli Defense Force-continuing to fire missiles into Syria killing Iranian military personnel or Hezbollah militia. Though Russia has supplied Assad with the S-300 ABM missile system it obviously doesn't protect every area of the country including where the Iranian military or Hezbollah is located.

Now with Trump reneging on the Iran deal how will this affect his meeting with North Korean leader Kim Jong-un later this month or early June? Kim has made known he is ready to forego his nuclear arsenal as part of a final peace treaty ending the Korean war along with the US formally agreeing it will not attack North Korea. But if the US can't be trusted in its formal agreement with Iran why should Kim believe the US wouldn't renege on an agreement with him?

Trump reneging on the Iran nuclear deal is going to bring unpredictable consequences to the world, none of which are positive.

The American people need to be protesting and demonstrating in front of the White House demanding of Trump no war with Iran, North Korea and withdraw from Syria. If they don't show the gumption to reign in Trump and his neo-con crazies who will?

Retired. The author of "DECEIT AND EXCESS IN AMERICA, HOW THE MONEYED INTERESTS HAVE STOLEN AMERICA AND HOW WE CAN GET IT BACK", Authorhouse, 2009
Related Topic(s): Iaea; Iran; Iran Nuclear Deal; Sanctions; Trump Speech, Add Tags
Add to My Group(s)
Go To Commenting
The views expressed herein are the sole responsibility of the author and do not necessarily reflect those of this website or its editors.