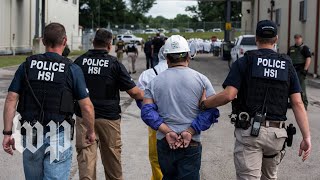 The Washington Post reported Tuesday that the Trump administration is considering conducting a nationwide militarized sweep to arrest 10,000 immigrants.

Citing seven current and former administration officials, the Post calls it "a secret White House plan to arrest thousands of parents and children in a blitz operation against migrants in 10 major US cities," including New York, Los Angeles and Chicago. The Post says the remaining target cities are "the other largest destinations for Central America migrants," which likely includes Washington DC; the San Francisco-Oakland Bay Area in California; Houston, Texas, and Miami, Florida.

Such a mass operation would require the deployment of thousands of armed federal police and agents. Units would fan out across working class neighborhoods, storming into immigrants' homes, grabbing them off the street, seizing them at their jobs or at school, and dispatching them to internment camps to be held for deportation. It would require checkpoints, illegal searches and the deployment of helicopters, paddy wagons and armored assault vehicles. The Post indicates that children as well as parents would be targeted for arrest.

The plan would not only constitute the largest immigration raid in US history, it would serve as a dry run for the mass round-up of strikers, protesters and other dissidents. Those planning such a massive operation doubtless conceive of it in this way.

Each police state operation conducted by the state against immigrant workers serves both to whip up anti-immigrant sentiment and normalize wholesale violations of democratic rights, dulling and conditioning popular consciousness for the imposition of dictatorial forms of rule.

Since several of the targeted cities are "sanctuary cities," where police are not allowed to participate in immigration raids, it is possible that the implementation of the plan would require the deployment of soldiers in working class neighborhoods. Last year, Trump deployed over 5,000 active-duty troops to the US-Mexico border in a clear violation of the principle of posse comitatus, which bars the military from conducting domestic police operations.

According to the Post, the plan was temporarily tabled several weeks ago by then-Department of Homeland Security (DHS) Secretary Kirstjen Nielsen and then-acting Immigration and Customs Enforcement (ICE) head Ron Vitiello. However, it is still being actively planned and discussed, according to the newspaper.

The Post article makes clear that Vitiello and Nielsen, who oversaw the forced separation of parents from their children in 2018, opposed the measure "not as a result of ethical concerns about arresting families." Rather, they expressed concerns over "the risk of public outrage."

Regardless, Trump dismissed Nielsen and Vitiello in April partly in response to their concerns. In firing Nielsen and announcing he was withdrawing Vitiello's name as permanent ICE director, Trump explained he wanted to take a "tougher" route in cracking down on immigration. The plan's most ardent supporters -- White House aide Stephen Miller and ICE Deputy Director Matthew Albence -- remain at their posts.

Last Thursday, former ICE Director Tom Homan said on Fox News that ICE should "do operationally what Congress has failed to do legislatively," i.e., carry out paramilitary, illegal operations on behalf of the executive branch. "ICE needs to do a nationwide operation," he said.

The readers' comments on the Washington Post article are overwhelmingly hostile. One reader wrote, "Open your Eyes America. Are we really the America our ancestors fought for? These policies by the Administration and the GOP are implementing Hitler and Nazi Germany tactics."

A top comment read: "My God. This sounds more and more like Hitler's fascism. Round them up, put them in a railroad car, and see what happens." A second top commenter wrote, "The only way to accurately describe Stephen Miller is a vile Hitler wannabe." Referring to Nielsen and Vitiello's phony opposition, another wrote, "maybe they just heard about the Nuremberg trials."

The US military has been preparing for years for the likelihood of domestic police operations in a major US city. In April 2013, entire sections of Boston were placed under de facto martial law and the Bill of Rights effectively suspended as police and federal agents went house to house searching for the persons responsible for the Boston Marathon bombing.

In August of 2014, the town of Ferguson, Missouri, was occupied by the National Guard, state troopers and an army of assault rifle-toting riot police, backed by attack dogs, armored vehicles and helicopters following the police murder of 18-year-old Michael Brown.

Related Topic(s): Children; Immigrants; Immigration And Customs Enforcement - Ice; Parents, Add Tags
Add to My Group(s)
Go To Commenting
The views expressed herein are the sole responsibility of the author and do not necessarily reflect those of this website or its editors.