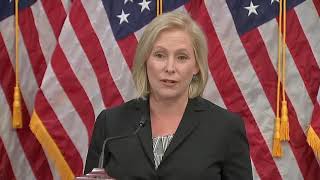 Thanks to Donald Trump's thin skin and pathological need to attack any woman who speaks the truth to and about him, U.S. Senator Kirsten Gillibrand's campaign for the presidency -- mostly media speculation and staff downplaying until now -- has been launched onto front pages, TV and social-media sites ahead of schedule.

Not that Gillibrand is complaining. In fact, she thanked Trump in typical Gillibrand style -- directly and defiantly. Just the way to get under his skin. And just the way to use his misogynistic history and instincts to put the spotlight on her signature issue -- sexual predation. It couldn't have been more perfect.

The launch began when the Democratic senator from New York called on Trump to resign as president in light of allegations of sexual assault or harassment from, at last count, 17 women. Gillibrand had already called for the resignation of fellow Democratic senator, Al Franken, of Minnesota, because of sexual-assault allegations and had said that, if Bill Clinton were president now and were facing the sexual-misconduct charges that led to his impeachment, she would expect him to resign.

Those two moves set Gillibrand apart from the two wings of the Democratic Party -- the progressives who love Franken and feel he was railroaded and deserves the hearing he requested, and the Clinton regulars who see any criticism of Bill as an attack on Hillary. Plus, some felt Gillibrand appeared to be ungrateful for the help she received from the Clintons when she replaced Hillary in the Senate. Members of both Democratic factions felt Gillibrand was exploiting a situation -- the whirlwind of sexual-assault allegations being made public about prominent men in various fields -- to advance her political career.

In other words, she stood accused of being a politician.

Apparently. being ambitious is acceptable, even commendable, behavior for men in politics, but not (with the exception of Hillary) appropriate for women. This fits nicely with Gillibrand's campaign to change prevailing societal attitudes and treatment of women.

And, critics notwithstanding, she didn't come late to the party. Indeed, she came to the Senate already focused on sexual and gender abuse, turning her focus on the military as a member of the Senate Armed Services Committee. She was one of the leaders in the move to do away with the "Don't Ask Don't Tell" policy that banned gays from serving openly in the military.

She has championed a bill, which has bipartisan support, to remove sexual-assault cases from the military chain of command. The Military Justice Improvement Act is a byproduct of hearings in 2013 on sexual assault in the military, which she held as chair of a subcommittee on military personnel. Gillibrand has also been instrumental in drafting the Campus Accountability and Safety Act, which would hold colleges accountable for sexual assault on their campuses. And she is building bipartisan support for a measure to revamp congressional procedures for dealing with sexual harassment.

If ever there were a case of right place, right time, right person -- right woman -- this sure seems like it. Gillibrand may or may not have been planning to run for president -- or maybe she was still assessing her chances -- but the combination of: 1) the misogynist Trump in the White House; 2) the Harvey Weinstein sex-abuse scandal in Hollywood; 3) the ensuing accusations, revelations, admissions, firings and resignations of high-profile men in powerful positions in media, movies, business, politics; 4) the Women's March movement; 5) the demonstration of women's voting power in Democratic victories in Virginia and Alabama; and 6) the legions of Democratic women who want a champion of their gender but for various reasons felt Clinton wasn't it, would seem to suggest a perfect alignment of the stars for a woman with excellent political instincts and without political baggage.

A word about those instincts. Gillibrand was appointed senator in 2009 to replace Clinton, who was nominated to be Secretary of State by President Barack Obama. Her selection by New York Gov. David Paterson was a surprise because Gillibrand was then a relatively unknown congresswoman from upstate New York. That is, conservative upstate New York. She had managed to be elected in a Republican-heavy district in large part due to her ability to recognize what was important to her constituents (agriculture, guns) and to communicate directly to them. She says they trusted her even though she was a Democrat and two out of three voters were Republicans.

But she changed when she moved from the House to the Senate, going from representing a conservative congressional district to representing a liberal state. Critics say it was cynical and political, aimed at getting re-elected. She says as she traveled the state she learned different views about issues that were important to people -- on gun control and gay rights for example -- and her views changed as she learned more.

Take your pick on the Gillibrand evolution. The proof is in the pudding. She has been vocal and persistent in the Senate in championing whatever cause she latches on to, including single-payer health care and family leave, which have been longtime issues for her.

Still, it is #metoo and the rapid recognition of millions of women of the political power that is theirs, waiting to be harnessed, not exploited, that has placed Gillibrand -- perhaps more so than another favorite Trump target, Democratic Sen. Elizabeth Warren -- at what may be a pivotal place in history. Four male Democratic senators called on Trump to resign before she did, with nary a tweet from Trump. Gillibrand's statement got to him.