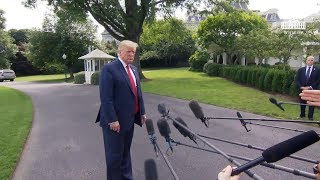 Donald Trump will almost certainly be impeached in the House, possibly as soon as Thanksgiving. The odds are rising that he'll be convicted in the Senate.

There are only two questions at stake, and the answers to both are becoming more obvious to more Americans every day.

The first is whether asking a foreign power to dig up dirt on a political opponent is an impeachable offense. The answer is indubitably yes.

When the framers of the constitution gave Congress the power to impeach a president, one of the high crimes they had in mind was acceding to what Alexander Hamilton called "the desire in foreign powers to gain an improper ascendant in our councils." James Madison argued for impeachment lest a president "might betray his trust to foreign powers."

Will they go public? Twenty-three Republicans are up for re-election next fall. Most are from red states that support Trump. But in a few months they'll be safe from primary challenges. They'll be free to vote him out.

Others -- Susan Collins of Maine, Pat Toomey of Pennsylvania, Rob Portman of Ohio, for example -- are from purple states where they'll be challenged by a Democrat and have every incentive to vote Trump out. Trump has no leverage over long-serving senators planning to retire, such as Lamar Alexander of Tennessee.

Meanwhile, he's losing support among responsible Senate Republicans like Mitt Romney of Utah, who calls his actions "troubling in the extreme." Nebraska's Ben Sasse, who urges colleagues not to "circle the wagons," and intelligence chair Richard Burr of North Carolina, who vows to "get to the bottom" of what happened.

Trump remains hugely popular among Republican voters but most of them care more about the economy than about Trump, and the economy is slowing in large part because of Trump's trade wars.

It's still unlikely Trump will be pushed out of office before the 2020 election but the odds are rising by the day. And Trump knows it, which is causing him to behave more like a wild child who deserves to be impeached.

Related Topic(s): Cookies; Impeached; Republican; Senate; Trump Mental State; Whistleblower, Add Tags
Add to My Group(s)
Go To Commenting
The views expressed herein are the sole responsibility of the author and do not necessarily reflect those of this website or its editors.