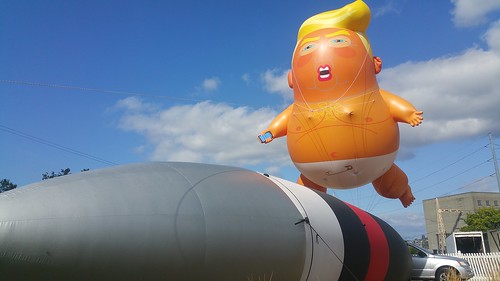 In an interview before the 2017 Super Bowl, Fox News's Bill O'Reilly questioned Trump's esteem for Vladimir Putin: "But he's a killer." Trump replied: "There are a lot of killers. You think our country's so innocent?"

Commenting on Trump's statement, Peter Beinart wrote in The Atlantic that we should not understand it as a criticism of the United States: "[Trump's] not interested in upholding the notion that America is morally superior to its foes. To the contrary, he wants to show that America can be just as tough and ruthless as everyone else." That's why he repeatedly said on the campaign trail that he supported torture and would do even worse than waterboarding to fight terrorism. He nominated Gina Haspel (aka "Bloody Gina") to head the CIA despite her record of supervising torture at a CIA black site in Thailand.

Trump has no patience with pretensions of morality in foreign policy. For instance, in a generally bizarre speech at CIA headquarters soon after taking office, he expressed regret that the U.S. didn't steal Iraq's oil during the second Iraq war: "If we would have taken the oil, you wouldn't have ISIS, because ISIS formed with the power and the wealth of that oil." As Aaron Rupar noted in Think Progress, taking the oil would be a war crime, an act of pillage forbidden by both the Hague and Geneva Conventions to which the U.S. is a signatory.

Putin isn't the only thuggish leader Trump likes to make nice with. His most bizarre friendship is with Kim Jong Un, the Supreme Leader of the most repressive state in the world. Last fall, at one of his MAGA rallies, Trump told the throng that Kim "wrote me beautiful letters, and they're great letters. We fell in love." Then there is Egyptian dictator Abdel Fattah-al Sisi, whom Trump correctly describes as a "f"ing killer." Trump called him on April 2, 2018, to congratulate him for being re-elected with 92% of the vote.

Another Trump pal is the brutal and corrupt Philippine President Rodrigo Duterte, who has ordered his police to summarily execute thousands of his people for drug use. According to a transcript published by the Washington Post, Trump phoned Duterte on April 29, 2017 to congratulate him for his "unbelievable job on the drug problem... what a great job you are doing and I just wanted to call and tell you that."

In his first speech to the United Nations, a year before falling in love with Kim Jon Un, Trump mocked him as "rocket man" and threatened to "totally destroy North Korea." As part of his recent saber-rattling with Iran, on June 25 he tweeted: "Any attack by Iran on anything American will be met with great and overwhelming force. In some areas, overwhelming will mean obliteration. No more John Kerry & Obama!"

He's telling the world that the gloves are off for American power: do what we tell you or we will hurt you with our military or strangle your economy with financial/economic sanctions. Trump's violent mouth blows away the pious sentiments associated with the U.S. being the "leader of the free world." Instead, he trumpets raw imperial power.

Jeffrey Goldberg wrote in The Atlantic (6/11/18) that he asked a senior administration official whether there was a doctrine behind Trump's foreign policy. The reply: "We're America, Bitch." Is that really us? Aside from its juvenile and churlish tone, does it reflect how our foreign-policy establishment has understood the U.S. role in the community of nations? Is it simply an aberration we can hope will go away post Trump?

After the global carnage of WWII, a triumphant U.S. seemed to promote a new era in which mutual respect and the rule of law would govern nations' conduct. American leadership in creating the Nuremberg war-crimes tribunals helped establish the legal foundation for prosecuting even heads of state for waging aggressive war and crimes against humanity (e.g. torture). The U.S. played a key role in the founding of the United Nations (still headquartered in New York City).

The UN Charter says that "All Members shall refrain... from the threat or use of force against the territorial integrity or political independence of any state. ..." (art. 2.4). The United States has consistently violated this principle since the earliest years of the UN's existence. It has exhibited a contempt for the ideals it promoted at Nuremberg and in the founding of the UN.

Many of the U.S. violations of international law were committed through covert actions by the CIA, a rogue and very incompetent agency. "Covert" actions let our commanders-in-chief (try to) deny their involvement. The CIA has deployed gangs of operatives all over the globe to overthrow democratic governments perceived as hostile to U.S. interests. We now live in a world of "blowback"--international crises caused by our illegal regime-change campaigns.

From 1953 in Iran to Venezuela today, the U.S. often followed a script described by Steve Kangas in GlobalResearch.ca. "First, American business interests abroad are threatened by a popular or democratically elected leader." This leader may pursue land reform, wealth redistribution or nationalization of a resource or industry (oil in Iran and Venezuela) from which foreign corporations have been extracting most of the profit. The CIA identifies right-wing groups within the country and offers them a deal: "We'll put you in power if you maintain a favorable business climate for us."

As Pepe Escobar reports, thanks to revelations by The Intercept, we now know that the impeachment of Brazilian Workers Party President Dilma Rousseff in 2016 and "the imprisonment of former president Lula in 2018 - just as he was set to win the latest presidential election in a landslide" were parts of a conspiracy coordinated with the U.S. This resulted in the election of fascist Jair Bolsonaro. In his first state visit to the U.S., Bolsonaro's first stop was at CIA headquarters.