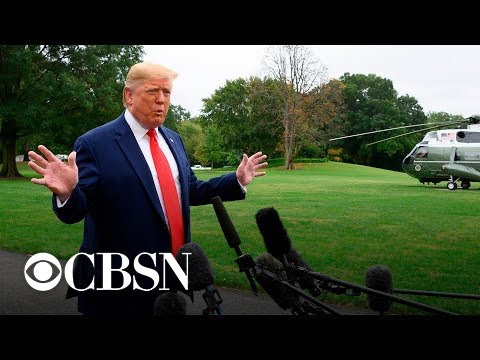 A particularly unperceptive and unfeeling wag came up with the bon mot defining a "socialist" as someone kept up at night by the fear that somewhere someone was making money. (Socialists are actually haunted by people working but not making money because the capitalist class is stiffing them).

But by that definition, Trump is our planet's premier socialist, with the proviso that the particular person he is afraid is making money is Hunter Biden.

The irony of Trump publicly asking China to investigate the Bidens should not be lost on us. The Republican Party has campaigned since the 1917 October Revolution against Communism, championing the business classes and the rights of Capital (i.e., the inviolable rights of those who come to monopolize capital).

Note that Trump has been working on a China investigation of Hunter Biden for some time behind the scenes, and while he denies it, his slapping of tariffs on so many Chinese goods may in part be his way of pressuring Beijing to give up the goods. It is yet another impeachable offense.

Trump is the head of the Republican Party and he is asking the Communist Party of China to investigate a businessman for the possible crime of making money.

Joseph McCarthy was enabled to become a national figure in the late 1940s and then the 1950s by a virulent anti-Communism and by a witch hunt he launched in 1949 over "who lost China." The defeat of Chiang Kai-shek and his nationalist Kuomintang by Mao ZeDong's Communists came as a shock to the U.S. foreign policy establishment.

Cooler heads such as George F. Kennan did not view China as a strategic threat to the United States and very much doubted that Moscow could dominate it. Kennan was enough of a social scientist to recognize that the big agrarian countries of East Asia did not have the sort of political economy that was suited to American-style capitalism, and that they might go through a Communist phase. As long as it did not get in the way of American geopolitics, he felt, why should Washington care?

McCarthy, in contrast, had difficulty distinguishing between center-right liberalism and Communism, and suffered from the paranoid delusion that Communists had infiltrated and taken over the US State Department (sort of the way Trump believes the government is full of "traitors," i.e., to him).

But McCarthy's dark view of "Red China" and its potential for disruption of US geopolitics, but not his paranoia about the homefront, was shared by the Eisenhower administration. As late as 1957, Eisenhower's secretary of state, John Foster Dulles, was forcefully arguing against recognizing Communist China or even so much as trading with it.

I think we know exactly what Republicans of the 1950s would think about Trump cozying up to Beijing in order to put a domestic political rival in a vise.

Never mind that Hunter Biden did not personally invest in a partially Chinese government-owned investment firm, BHR Equity Investment Fund Management Company, until 2017 after his father was out of office. He only put in some $400,000, a tenth of the company's holdings, which then come out to $4 million; and Hunter Biden maintains that he hasn't seen a dime in returns yet. So he hasn't exactly taken $1.5 billion out of China, though he may be guilty of influence-peddling (on an extremely small scale in China).

To have a Republican administration characterize Hunter Biden's tiny China investment, done after his father was a civilian, as some sort of massive criminal undertaking is another fantastic claim from the biggest liar-in-chief the United States has ever had.

Maybe the MAGA crowd should rethink its opposition to socialism. Many of them are white working class people with limited education, and they are the ones that would most benefit from it. And since Trump seems to think there's something wrong with making money, it isn't as though the old "free enterprise" mantra means much any more.

Related Topic(s): Chinese Communist Party; Hunter Biden; Trump Attacks Joe Biden; Trump China Trade War; Trump Liar, Add Tags
Add to My Group(s)
Go To Commenting
The views expressed herein are the sole responsibility of the author and do not necessarily reflect those of this website or its editors.