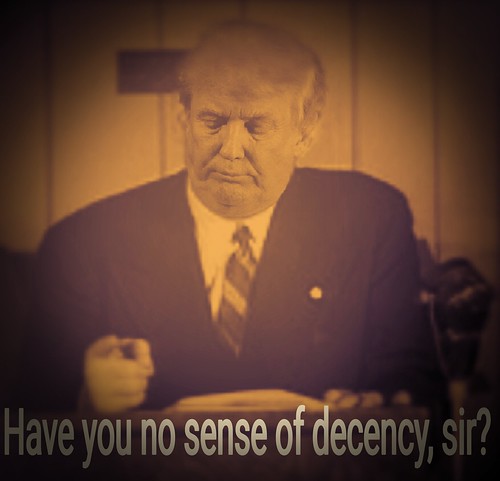 The Leader
(Image by IoSonoUnaFotoCamera)   Details   DMCA
Bob Woodward reveals in his new book that, in a secret meeting on Jan. 28, national security adviser Robert C. O'Brien warned Trump of the impending menace of COVID-19: "This will be the biggest national security threat you face in your presidency." Deputy national security adviser Matthew Pottinger agreed, adding that "the world faced a health emergency on par with the flu pandemic of 1918, which killed an estimated 50 million people worldwide." So, Trump had the relevant information from authoritative sources: COVID-19 will be a killer epidemic.

Thanks to Woodward, we have Trump, in a voluntary recording, admitting that he had the information. On Feb. 7, ten days after the meeting with O'Brien and Pottinger, Trump called Woodward and told him the virus is "deadly stuff," and "more deadly than even your strenuous flu." He also said, "You just breathe the air and that's how it's passed." This from someone who as recently as Sept. 3 made fun of Joe Biden and Mitt Romney for wearing masks in a crowd.

Despite knowing that the virus was deadly and easily transmitted from human to human, he repeatedly told the American public that it was nothing to worry about. For example, on Feb. 26 at a press conference with his coronavirus task force, he said: "This is a flu. This is like a flu." The next day he said, "It's going to disappear. One day it's like a miracle, it will disappear."

On March 19 Trump acknowledged to Woodward that even young people were vulnerable: "Now it's turning out it's not just old people, Bob. Just today and yesterday some startling facts came out. It's not just old -- it's plenty of young people." Nevertheless, he wanted to continue minimizing the danger: "I wanted to always play it down. I still like playing it down. Yes, because I don't want to create a panic." If Trump knew that a fire had started in a school building, would he have downplayed the danger rather than "create a panic"?

As of Aug. 6, the U.S. had a total of 380,174 reported cases of children with COVID-19. The day before, Trump said on Fox News that "If you look at children, children are almost - and I would almost say definitely - almost immune from this disease." Facebook and Twitter removed the video of Trump saying this because, as Facebook stated, "This video includes false claims that a group of people is immune from COVID-19 which is a violation of our policies around harmful COVID misinformation."

Trump has regularly held rallies and gatherings attended by people in close proximity and without face masks. Among the most striking recent examples was Trump's Aug. 27 acceptance speech on the south lawn of the White House. It was attended by 1500 mostly maskless people close together. The White House served as a prop not only for his campaign but also for his damaging message about the unimportance of masks and social distancing. The example it set no doubt contributed to the constantly mounting toll of sickness and death in the nation.

The President of the United States is guilty of mass reckless homicide. "Reckless," in a legal context means "Behavior that is so careless that it is considered an extreme departure from the care a reasonable person would exercise in similar circumstances." Trump's relentless misinformation and deliberate bad example continues to cause many of the nearly 200,00 deaths and millions of illnesses nationwide. His behavior is an "extreme departure" from what a reasonable person would exhibit when bound by his oath of office. Instead of protecting his country, he has knowingly done it grievous harm. He is a criminal who should not be allowed to continue in office.

Related Topic(s): Coronavirus; Trump; Trump Campaign; Trump Crime; Trump Inaugaration; Trump Liar; Trump Presidency; Trump Rally; Trump Tape, Add Tags
Add to My Group(s)
Go To Commenting
The views expressed herein are the sole responsibility of the author and do not necessarily reflect those of this website or its editors.