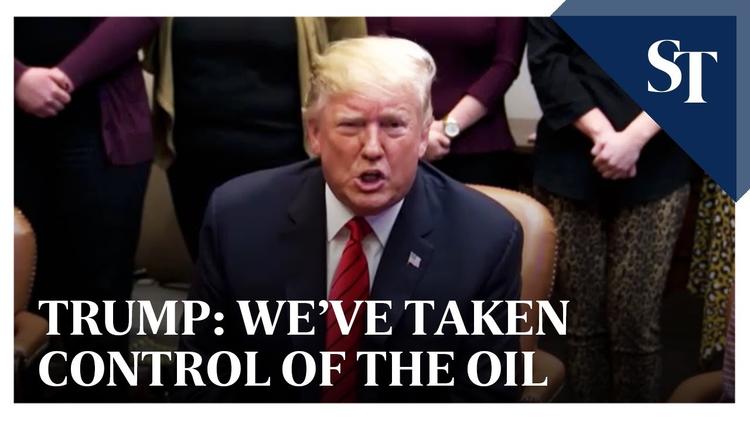 Trump claimed that "we've taken control of the oil in the Middle East" as a result of his greenlight to Turkey to invade Syria.

So Trump has not actually taken control of any oil at all by letting Turkey into northeast Syria.

But there is a sense in which he has done the opposite. Likely one of the many goals of the US presence in northeast Syria was to prevent the Syrian regime from recovering the oil and gas fields there (and most such Syrian fields are in the northeast). The ISIL "caliphate" had taken many of these facilities in 2014 and used to sell crude to the Syrian regime and smuggle it to Turkey, as a source of income.

And then the US bombed many of the oil and gas facilities as the Kurdish People's Protection Units (YPG) took them back away from ISIL. Most of them were probably too damaged to provide much income to the Kurds subsequently, but perhaps some of them did.

Although 400k barrels a day is a drop in the bucket in world oil market terms, given that the Syrian regime of Bashar al-Assad is an economic basket case, getting back those oil and gas fields would be, over time, a godsend. Or in this case Trumpsend.

The Kurds have thrown in the towel and invited Bashar al-Assad's Syrian Arab Army and its Russian ally back into the northeast, which has 90% of Syria's oil and 45% of its natural gas.

The Russian channel Sputnik reports in Arabic that a Syrian government spokesman has announced that all the oil and gas fields of Homs, Hama and Raqqa are now in the hands of the Syrian government again and that investments are being made to bring them back online. It will take a lot of work to do so, given extensive war damage.

The Syrian Arab Army and Russian troops entered Raqqa, the former ISIL capital, just a few days ago, after the Kurdish YPG withdrew to concentrate on defending its northern lines against Turkey. Despite the resurgence of some slight ISIL terrorism activity in eastern Syria, the Damascus regime seems eager to reassert itself there, especially given the likelihood of recovering oil and gas fields.

The Russian press is speculating that Russian companies will be the ones to develop and benefit from these recovered fields.

A Russian government spokesperson said Friday that Moscow is completely confused by US aims in Syria. I guess so. They can't figure out why Trump gave them and Assad this gift of recovered oil fields, which could eventually strengthen the Damascus regime.

*The first draft of this post misstated the situation at Bakken, saying "well" instead of "field."

The Straits Times: "Trump: 'We've taken control of the oil'"

Related Topic(s): Assad; Isil; Oil; Oil And Gas Fields; Russia - Syria Treaty; Syria; Syrian Kurds; Trump; Trump Liar, Add Tags
Add to My Group(s)
Go To Commenting
The views expressed herein are the sole responsibility of the author and do not necessarily reflect those of this website or its editors.