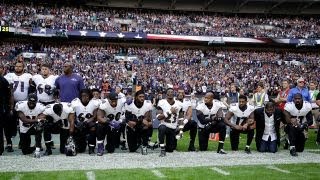 There is a ton of news about what the current NFL protests mean, politically speaking. For the moment, I'm leaving that out. I want to take a different angle.

The first thing to know is that Donald Trump once played a key role in an upstart pro football league called the USFL, which lasted three seasons (1983-85) before it collapsed.

As the owner of the New Jersey Generals and the most powerful force in the League, Trump went up against the NFL. He wanted the USFL to schedule its games opposite the NFL starting in the fall, not the spring. Trump was a key player in suing the NFL for monopolistic practices.

The USFL won that suit, and was awarded the grand sum of...three dollars. Yes.

So The Donald has held a grudge against the NFL for a long time.

His recent tweets and statements, urging the league to take action against players disrespecting the National Anthem, urging teams to fire protesting players...all this has a history.

But there is a deeper story, and it emerges at a time when television ratings for the NFL have already been declining, and the television networks -- especially ESPN -- are carrying massive billion-dollar contracts with the NFL for the rights to broadcast games.

On top of that, ESPN features show-hosts who are firmly in the Colin Kaepernick, pro-protest camp. These talking heads are politicizing sports every day, and many fans don't want that.

What do they want from ESPN and from the NFL games they watch? They want sports, competition, heroics on the field. They want their favorite teams to win and the teams they hate to lose. Period.

In theater, there is a phrase, "breaking the fourth wall." It's used to describe plays that address the audience directly and shatter the illusion of viewing a self-contained world on stage.

This is where the deeper story of football enters the scene. For fans, the political/sports commentary and the protests on the playing field are breaking the fourth wall.

They can't watch the games in a trance.

They can't enjoy the vicarious thrills and chills.

The same thing is happening in the television news business. During the Obama presidency, there was the (promoted) mainstream illusion that White House business was being conducted in the usual hermetically sealed container. It was a controlled stage play -- and people could sit in front of their television sets in a popcorn trance and watch it unfold. All in all, with major exceptions, the hypnotic spell held. For a while.

Related Topic(s): Government Bullying; Nfl Protests; Trump Cruelty; Trump Ego; Trump Insults, Add Tags
Add to My Group(s)
Go To Commenting
The views expressed herein are the sole responsibility of the author and do not necessarily reflect those of this website or its editors.